Heyo! It's time to talk about design once again. This time, I am going to focus more exclusively on design talk, and less on what the team has produced. Some of these design changes are currently in the process of being implemented, so this is going to differ from our 0.3 build.

Alex and I had the chance to observe a playtester in person and we saw something... fascinating. The person played for about 20 minutes, and never interacted with a single memory. Sure, they seemed to have a good time just exploring, which is really at the heart of the game, but they didn't get to experience the core gameplay. They went up to a memory object and attempted the focus mechanic on it, then walked away. They never actually saw a memory play out. After the test, I asked them why, and they said they thought they'd seen everything there was to see.

The game is meant to be an endless cycle, where the player never quite feels like they've seen everything, or seen everything in the same light. We are not there yet, but the end is in sight and it is clear what we need to do to get there. Every playtester said they left after finishing one full cycle of the seasons, or sooner. We want the player to feel like they can leave the game at any point, so this is not quite a problem per se, but we certainly want to see someone stick around longer. To be fair, there is still not enough out there in the map to provide a compelling reason to keep playing and replaying. Rest assured, we are working tirelessly toward that goal.

Based on the need to make a good and replayable experience, I decided to add an extra element of variation to certain memories, particularly the less important ones. For instance, the stargazers would have two or three different animations with different actions. Another example is one where you find a character sitting alone, crying. In that case, the character model itself would swap out when the memory appears, reusing characters from other stories. This way, we can get more mileage out of memories that otherwise wouldn't have much substance. 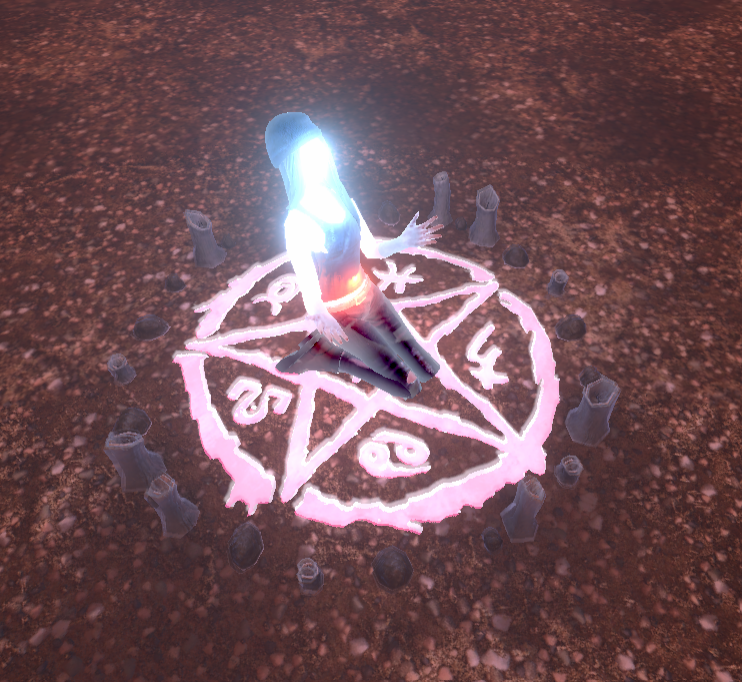 In one of our earlier playtests, we had a player who found the guitar player memory five times in a row. This was an unfortunate side-effect of our memory implementation at the time. We didn't have enough memories ready for the build, so my temporary solution was to add repeats of the more generic memories to fill out the map. I tried to space them out as best I could, but there was only so much I could do with what we had at the time. In retrospect, we probably should have tried limiting the explorable area temporarily, just to focus on delivering a good vertical slice of the game. Our solution to this issue involves the implementation of a pool of randomized memories, and more importantly the implementation of the rest of the unique memories.

The focus mechanic is frequently being tweaked to improve the overall feel and challenge. It should feel like the player is facing some kind of resistance, as if they are squinting and struggling to bring something into focus. So far, players have fairly consistently said that focusing was easy or too easy, and I agree. It is way too easy to breeze through the mechanic and activate a memory, and even when you do fail it's not that much of a fail.

Another issue is that memory objects do not always catch the player's eye. Some of them were more noticeable than others, They already had a soft glow effect, but it was not enough. Our currently planned improvements include an animated visual effect, and sound design. Memory objects will emit a soft, mystical sound before they have been activated, and the focus mechanic itself will have its own sounds to give the player feedback. Here you can see the visual effect in its current form, soon to be changed. It may be clear enough when you're nearby, but there's not much to catch your eye from a distance. 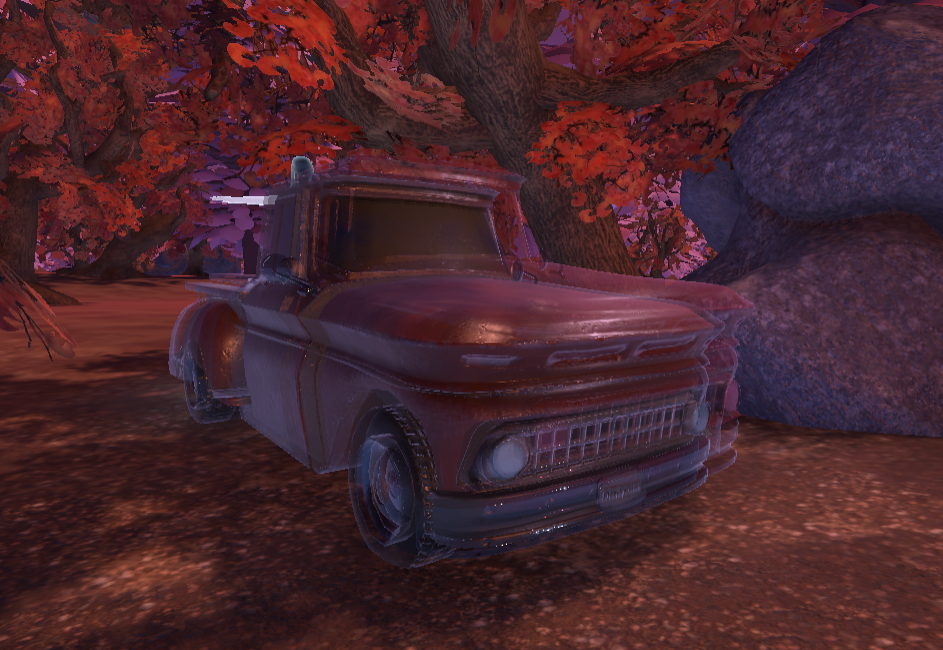 Right now, our level designers have been busy not only detailing and adding visual interest, but also baby-proofing the map by putting up fences and invisible barriers. In every playtest, somebody has walked off the edge of the map just for fun. Amusing as that was for them, it's a little bit tiring to see as a designer. We are much more interested in seeing how players explore the environment. The boundary was always planned but never actually established, and finally it's there. 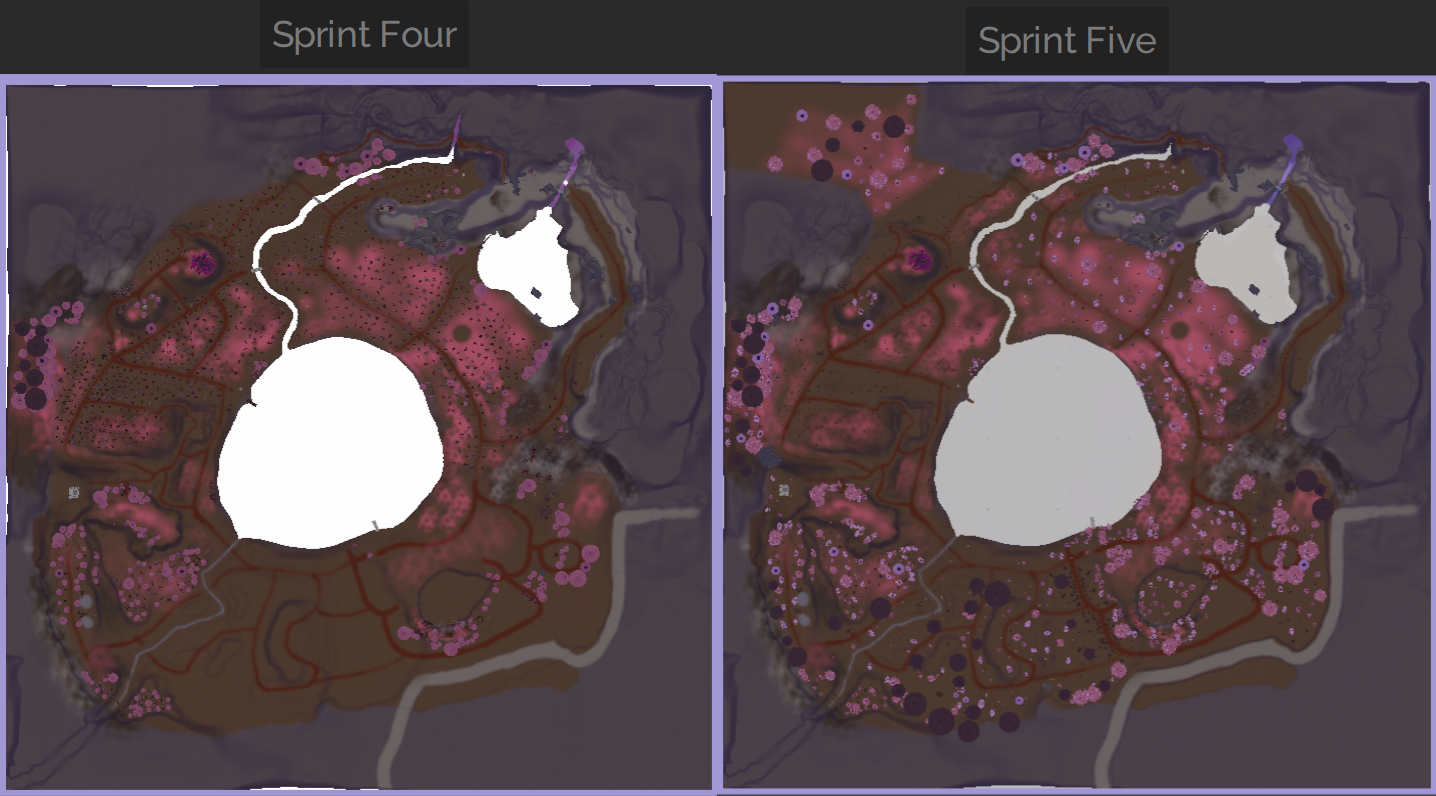 One major design change that happened since the previous blog post was the addition of a second trail along the ridge. Previously, there was only one way up and down to the overlook, by the trail on the right. There is something to be found at the top of the overlook every season, but it was still a massive dead end. Players hate running into dead ends, and we hate to disappoint players. I had a lot of time on my hands over spring break, so I went ahead and sculpted this path into the terrain myself. It's meant to feel kind of secretive, like something you wouldn't know was there until you were right upon it, so it's going to be partially hidden by trees. 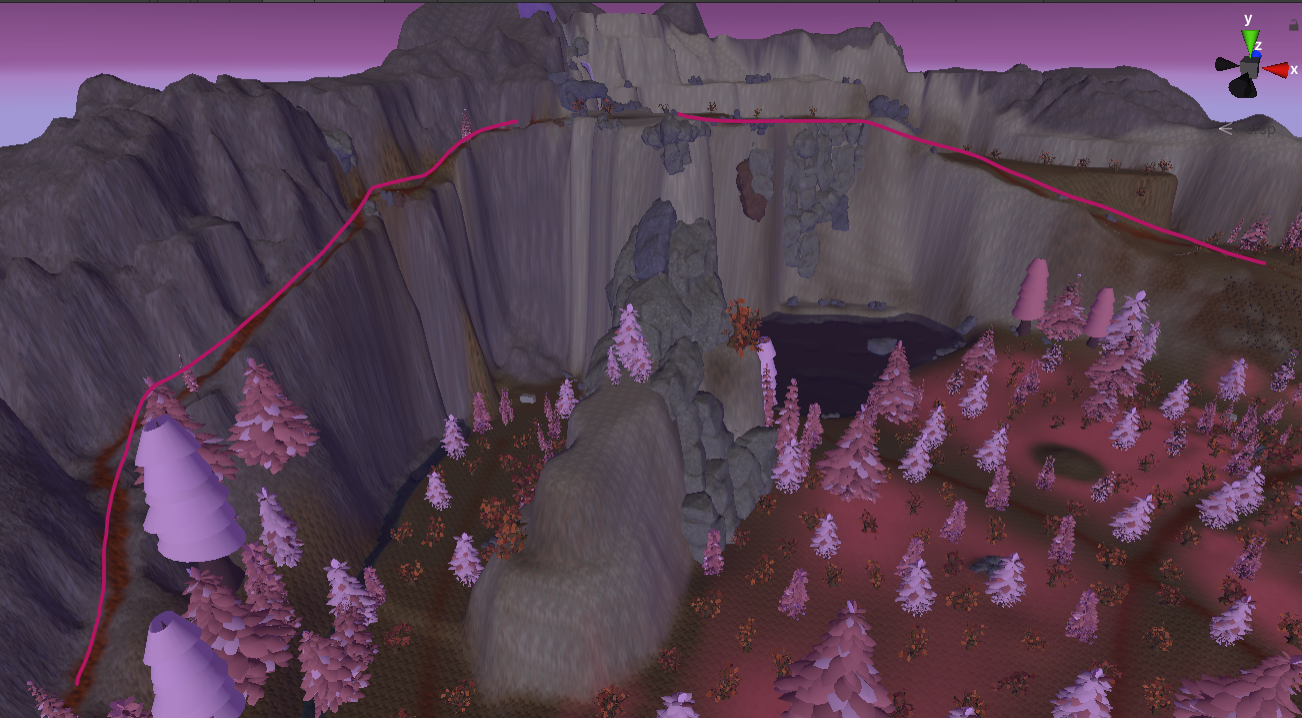 We have several character models remaining to be made, and many memories yet to be animated. It's become clear that we need to do everything we can to make things to go as smoothly as possible in these last sprints.

Going forward, we are asking Patrick to submit models that do not have UVs, textures, or finishing details, where the only thing that is finalized is the overall proportions. After that, he will move on to the next character and give it the same treatment, and then return to finish them off with textures. This way, I can get our characters rigged and into the hands of our animator fairly rapidly.

Several of our written memories are meant more as filler content, and they really do not warrant unique characters. Some of them, like the bonfire memory, even involve small groups of several characters. It would be a waste of resources to make unique character models for each of those, so in those cases we will use a small cast of "generic" characters. Rather than draw-up new designs, these ones are simply repurposing unused variants for previous character designs. Mel's character concepts always present me with a difficult choice, because they're all so good and it's hard to pick. Here you can see some of the alternative designs for other characters that I've selected for our generic cast. 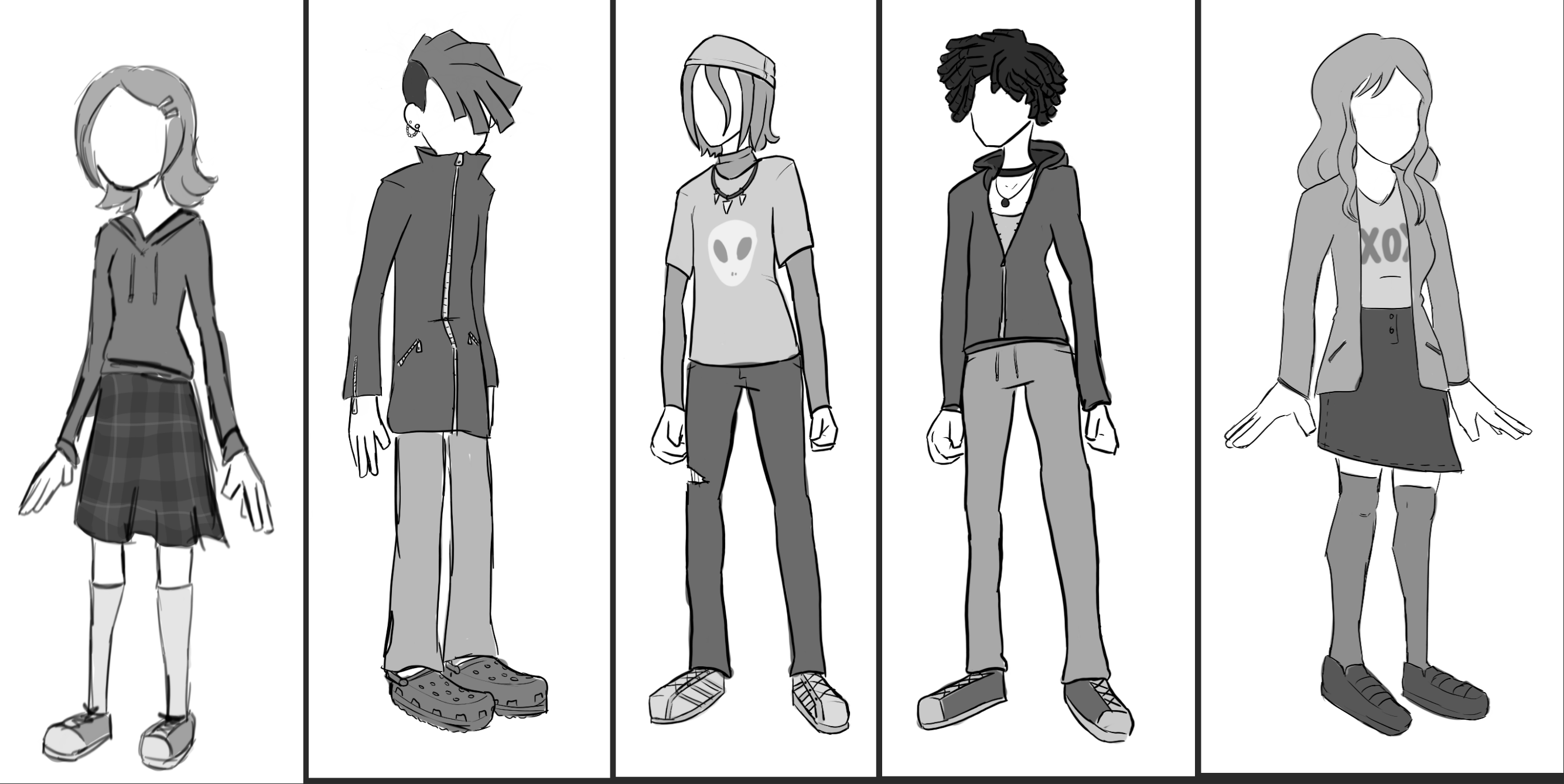 I asked our prop modelers to break up their work into two stages: The first stage is creating a basic version of the model with an emphasis on overall form, and the second stage is for creating the fully detailed, textured model. This is a workflow I have used in the past when I was a 3d artist on other projects, and I find it is a smart way to keep stuff moving along on a team.

We have used this workflow on and off throughout the project, and things tend to run more smoothly when we stick to it. Our modelers are awesome, and their work always has such a great level of detail. In the interest of getting assets into the hands of our level designers, however, I needed them to tone it down at first. This way, they can spend time on the details after getting multiple models blocked out.

Here you can see what that workflow looks like. On the left are the first versions of each tree. These have the overall form and a suggestion of the aesthetic, which is all that a level designer needs to start placing them in the level. On the right are the current versions of the trees, which have everything but the textures.

Finally, I just wanted to give a special shoutout to Justin for making this old abandoned barn. It's actually inspired by a real location, not far from my home in the Bay Area. I took some reference photos, and told Justin to make a more severely wrecked version of it, and he absolutely delivered. This place seriously gives me the creeps. 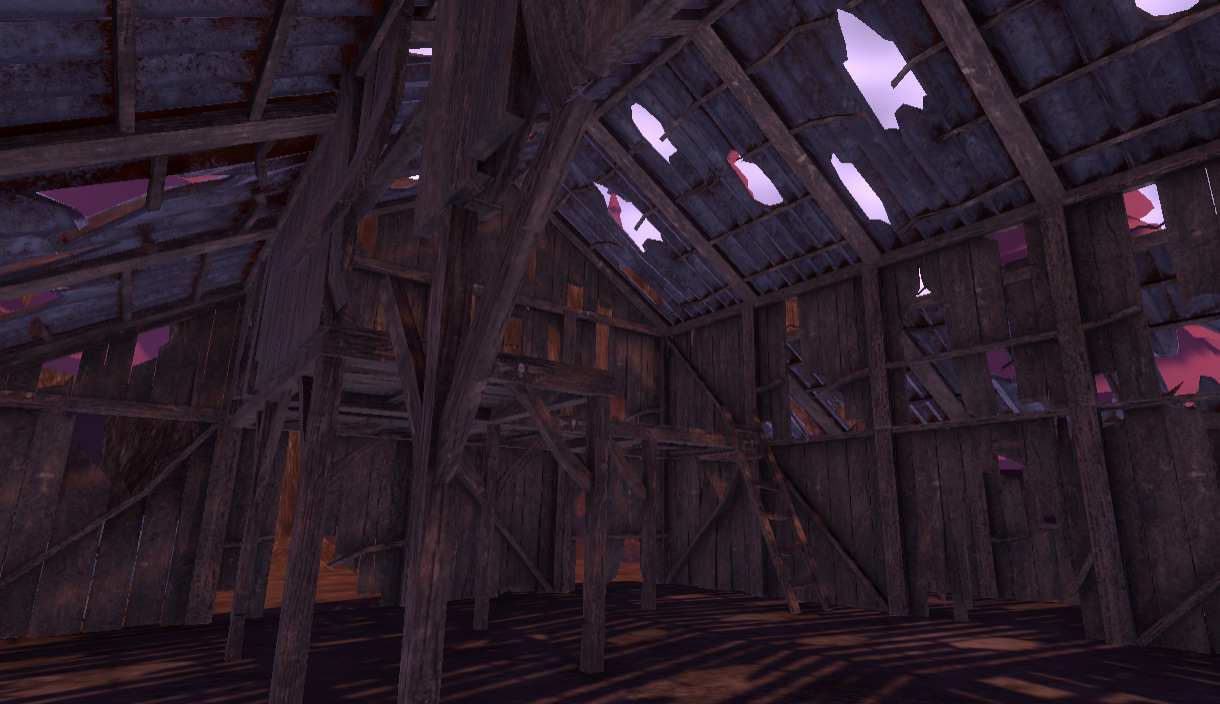