Heyo! In the wake of our electronic prototype, it is time for another dev blog. As a designer, I have to say that it feels amazing to watch a team build this thing, as if reading my mind with frightening accuracy. The goal I set for our prototype was to have two memories, two seasons, a tutorial, and a landscape the player was free to explore. We hit all of those goals. 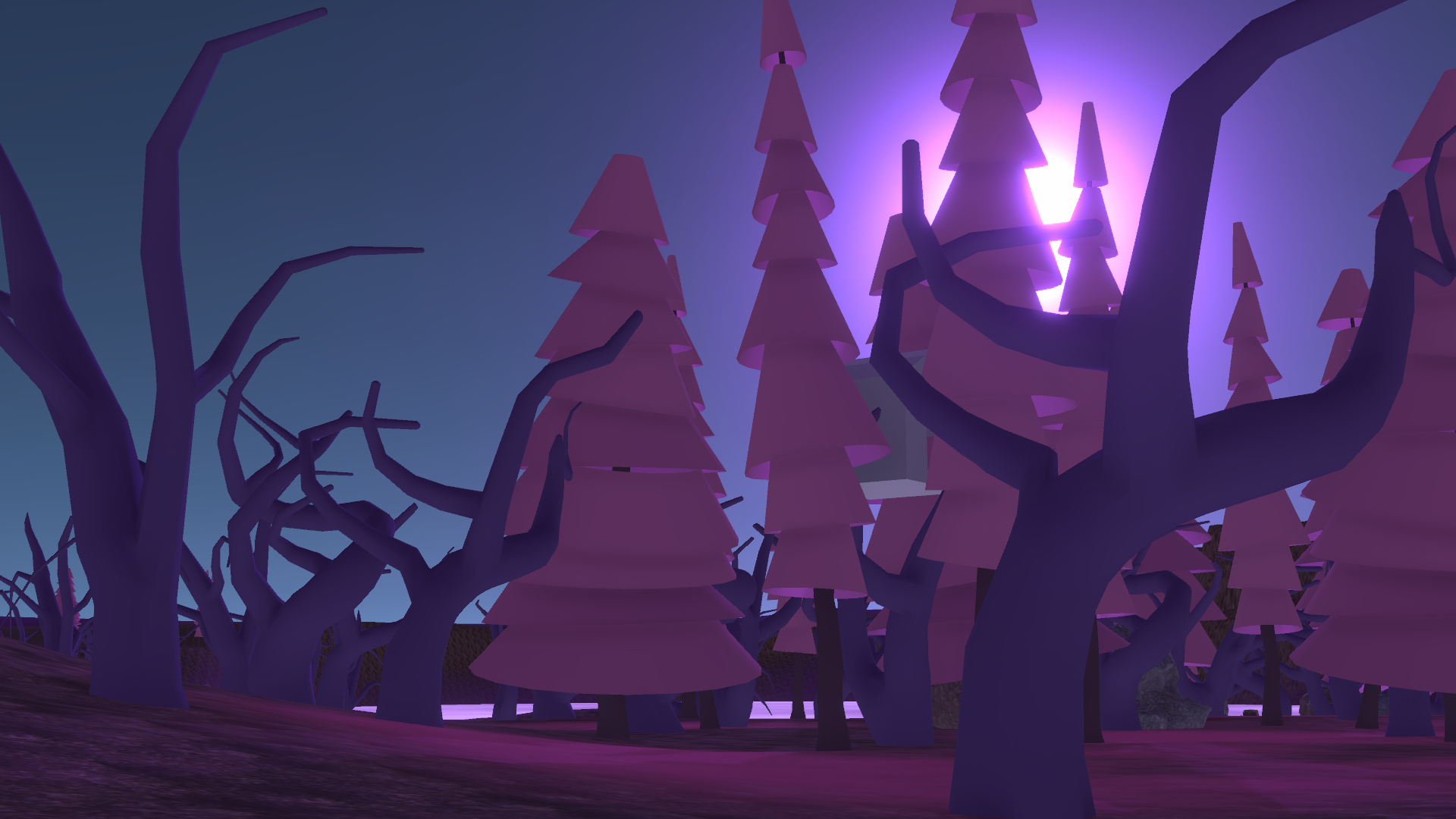 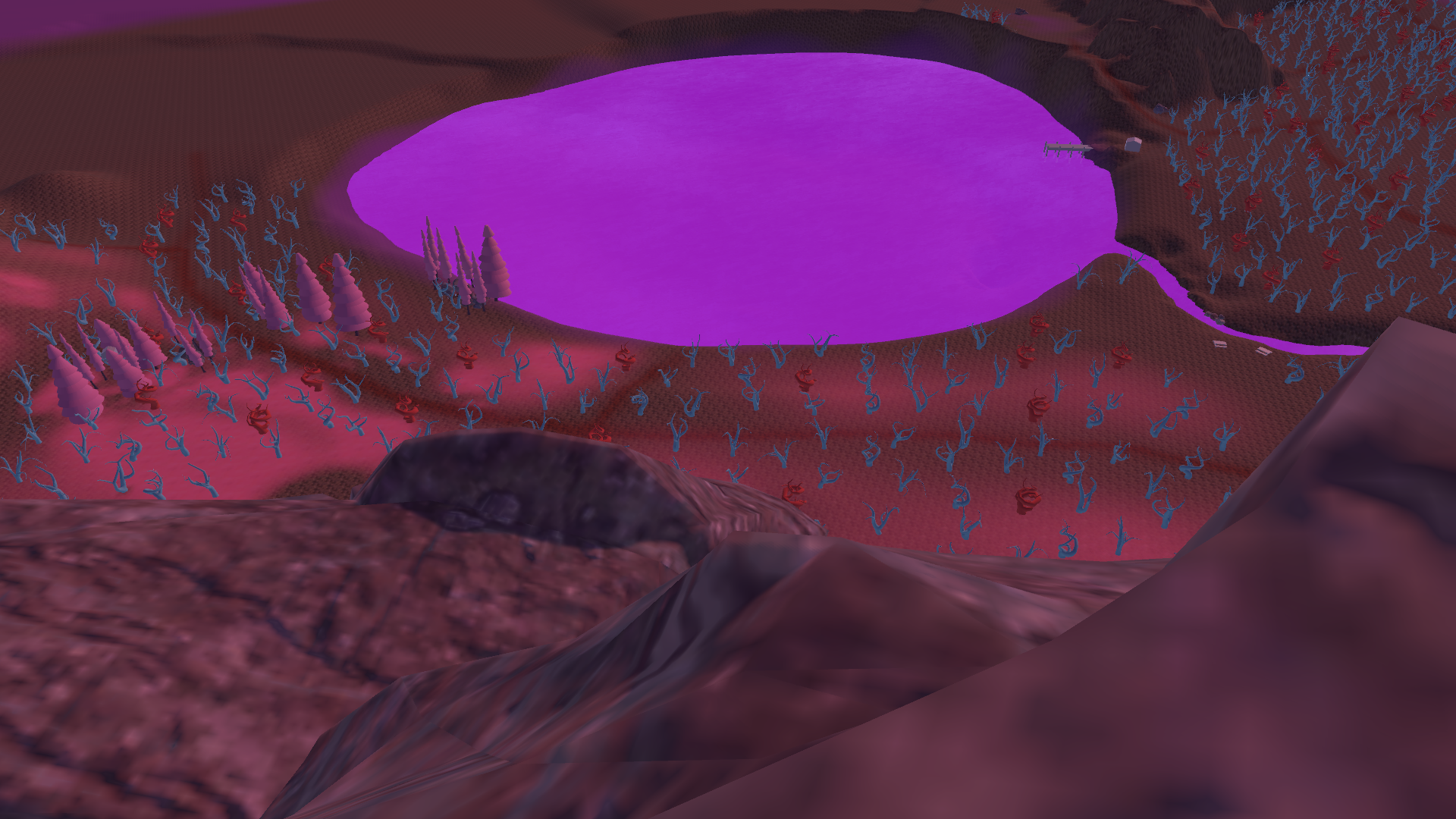 The narrative and characters at the heart of this game are really a collaborative effort between design, 2d/3d art, and animation, and it feels easier to discuss them together. Starting off, we have our first character fully modeled and textured by Patrick. You can see the concept in the last post, and this is pretty much spot-on. I love how much personality she has, with just the right amount of detail. Her partner in crime was also fully modeled by the end of the sprint, awaiting textures.

Mel continues to draw concepts for future animations. These animations need to have some real thought put into them, and our storyboard-to-animation pipeline continues to make a lot of sense. Some of these sequences already have changes planned based on feedback, and sketches let us catch that stuff early instead of having to redo animation. In the overall story, we're looking for memories that represent the range of real human experiences and emotions, balanced with some elements of strangeness and suggestions of magic. These boards were all based on prompts I wrote. In the interest of getting memories implemented rapidly, Mel has also been posing our base mesh to represent memories, as placeholders for animations. 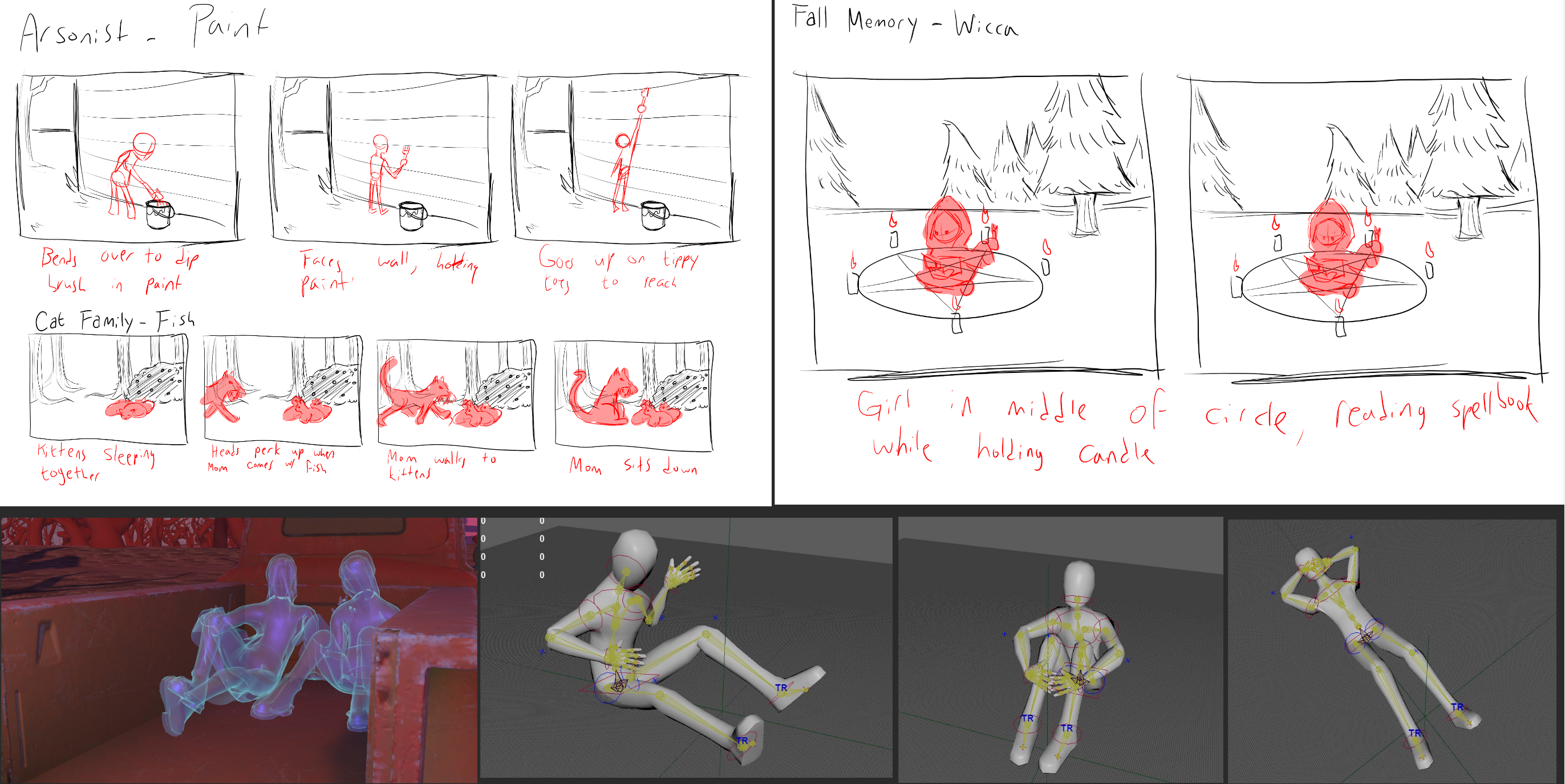 Justin, our prop modeler, has been focused specifically on props that are relevant to memories. The very first one was this truck. This BEAUTIFUL truck. It's based on a 1963 Chevy StepSide pickup (the same one Bella drives in Twilight), which I picked because it had the exact aesthetic I imagined for the girls with flannels. Cars are complicated to model, and I am in awe at how Justin handled it. Something equally impressive was this guitar, which Justin stayed up late finishing. He showed me a work in progress shot of it, and my only feedback was "Beat the hell out of it. Just scratch it up," and he followed through. I think it came out beautifully damaged.

The level design team has made major strides on envisioning and creating the lake. Matthew has been tweaking the terrain in quadrants one & two and starting to detail it with props, while Alex has been planning content for quadrants three & four in 2D. Here you can see the progression of the level from the start of the sprint to the end. 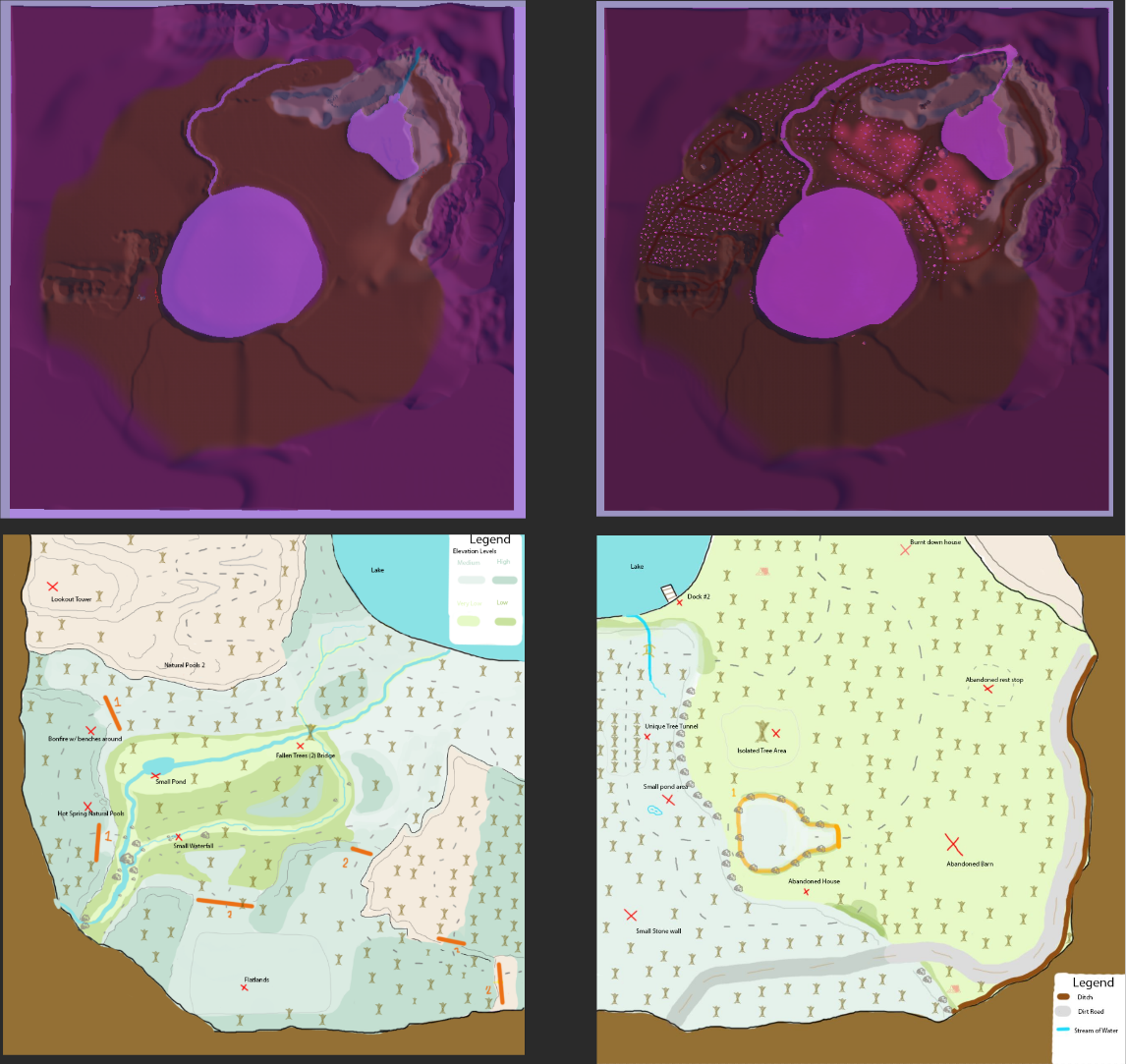 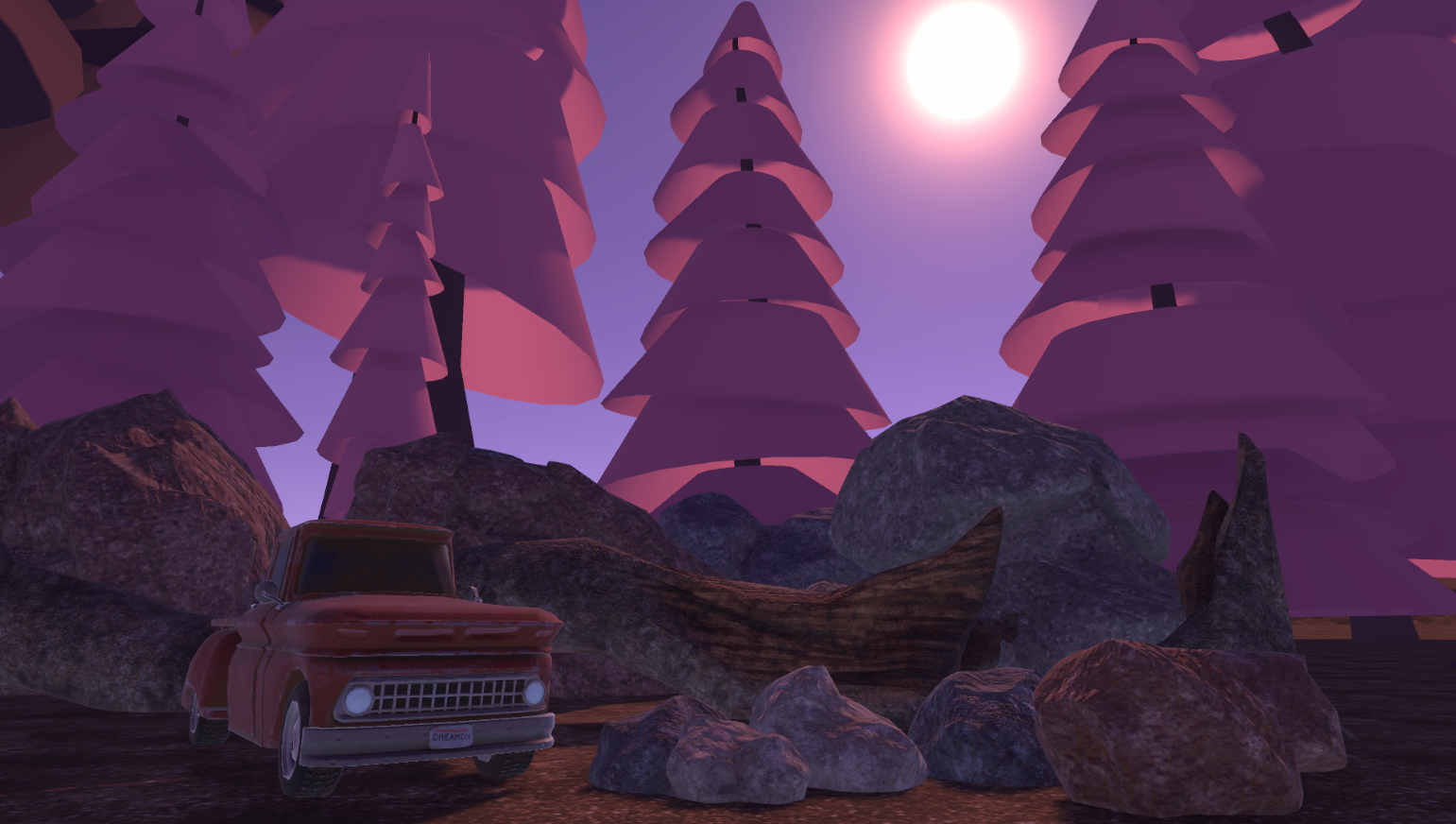 All of the 3d models seen above were completed this sprint. Brie delivered some excellent environment models that enable our level designers to create this strange land. Her rocks and boulders... well... rock! Seriously, this set of props is actually incredibly versatile with all the different ways you can arrange them. Even her blocked-out tree models have a certain elegance to them, and it's not hard to imagine that elegance continued to the final models. Brie also created the fallen tree, and a set of bushes. She was deliberately asked to hold off on finishing these with textures, in the interest of getting props into the hands of our level designers. Justin and Hunter have some of the strangest jobs on the team, since they have to make sense of my strange ideas. Justin got our season transition system and "focus" mechanic functioning, while Hunter has been laying the groundwork for the weather system, setting up post processing, and a pause menu. You can see all of this in action in the 0.1 prototype, currently downloadable on itch.

We had a total of 6 playtesters, with 4 responses to our survey. A small sample size, but we got some good information that pointed out some things we could have missed. With only two memories and only part of the map detailed, the prototype is honestly a bare shell of what the game itself will be. Overall, players responded favorably and were interested in returning to the game when it has more content. I could go on about this for... a while, but instead I'd like to share some highlights. Matthew and I had the change to observe two playtesters in person, and that was kind of eye-opening. We saw one person explore the map for almost half an hour, and they really seemed to get into the game! On the feedback form, this person indicated that they felt they explored the map completely. I know for a fact that they missed a couple of unique spots, which means that there's still more our there to find.

Most players were immediately drawn towards the cabin, and started walking towards it. There weren't any memories placed in that area so far, and It took them a little while to circle back and find one of the memories. In the end there will be something to find over there, but a key takeaway is that we need to be more deliberate about how we use elements of composition to guide the player.