We had 8 playtesters for our last build. We got a lot out of the data this time in part, because I made the feedback form more comprehensive rather than focusing on specific features. In past builds, I strayed away from super long forms, since making someone fill out a 10 minute survey is a big ask, and I wanted people to be willing to playtest more in the future. This time I did only new playtesters, so the survey being too long didn't matter. I also learned to use sections to filter out questions based on what was relevant to that particular tester's experience, so I was able to fit in a lot more questions without making the feedback form take an excessive amount of time to fill out.

We ended up getting some surprising data. Most significantly, a minority of players are grabbing enemies. I knew figuring out how to grab enemies was a problem which is why I put this question in, but I didn't expect most playtesters to not grab at all. 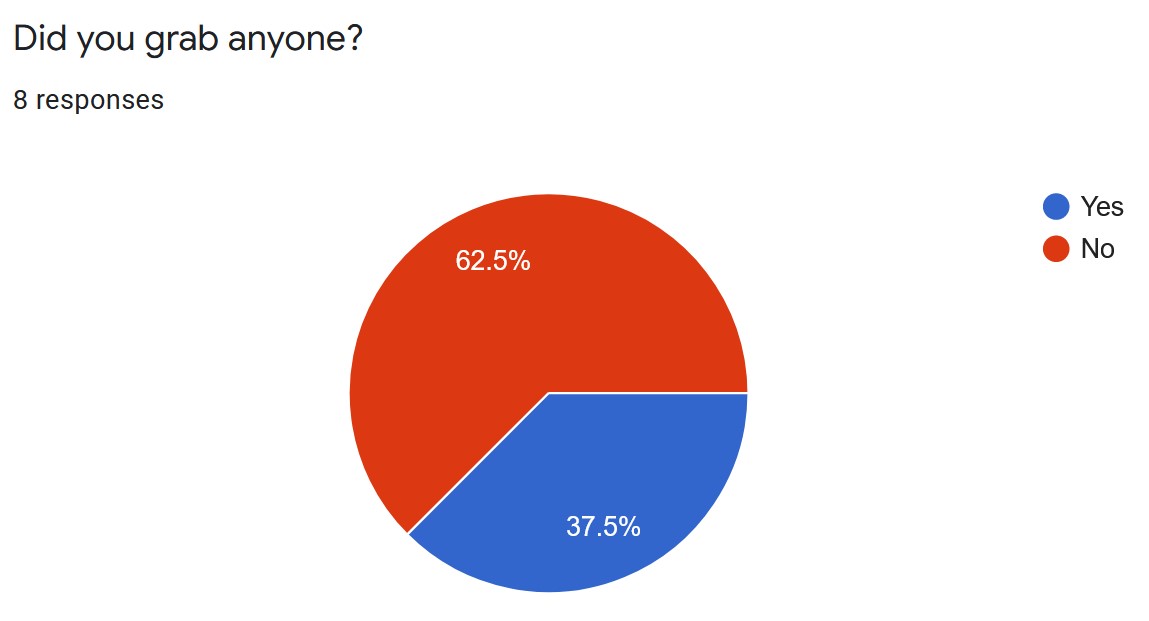 If most players are missing the primary feature of the combat, that's a huge problem. That leaves us with two options: create an extremely noticeable animation, sound effect, and visual effect that indicates that an enemy is staggered, and then tell the players through a tutorial those effects indicate that an enemy can be grabbed (the current plan), or allow players to grab enemies in more situations.

Option 1 would keep a lot of the game the same, but would require multiple teams to create assets for being staggered later in the game, and wouldn't fix several other issues with the current grab system. Option 2 would make the players stronger which can be counter balanced by adjusting enemy health, and increasing the stamina consumption of throws. It's also tricky to grab an enemy that isn't staggered without being hit by an attack, so players wouldn't be grabbing for free, and that would remain a tangible benefit to staggering enemies before trying to grab them. Players are already able to grab their teammates repeatedly, and use them as weapons, so being able to grab enemies in more than just the one state wouldn't make the players radically stronger.

The stagger-inflicting heavy attacks have endlag to make them feel heavier. This pairs poorly with stagger being a short grab window, and makes combos into a grab feel sluggish. If grabbing teammates is fast, why would players try to grab enemies when that's slower? The point of stagger was to reward players for engaging with the game's basic combo system, but what ends up happening with the players that do grab, is they spam the first heavy attack to stagger as soon as possible to get to the grab: forgoing most of their attack options in the process.

Even with audio feedback and more of the animations implemented, the majority of playtesters thought there was only one light and one heavy attack. Granted, most of the animations are still missing, but spamming the light attack button

Watching people playtest the game in a group, I noticed that they grab each other almost immediately, but take a long time to figure out how to grab enemies. This is what I think is going on here. The first thing that players can try to grab is their teammates. When they're fiddling with the buttons to see what they do, they can grab each other before leaving the spawn room. Their teammates don't need to be staggered first, because it has to be impossible to injure your teammates, or conflict can break out between them (this is not a high skill game, so friendly fire would do more harm than good). This creates the impression that grabbing only works on teammates, so it isn't instantly intuitive that there's an additional condition to grab enemies. While I'm in favor of option 2 (allowing enemies to be grabbed in more states), I'm also aware of how late it is in development to make such a change. This is a problem I should have identified in the prototyping phase. However, I don't want the game to be less fun just because it took me too long to notice a problem with the combat system, so I'll be experimenting with grab states, and playtesting a build with the easier grabs.

Despite not knowing you can heal by dabbing on enemies, playtesters didn't need to heal at all. They actually reported in their feedback that the levels weren't challenging enough. I'm considering removing healing, since none of them used it, and it was always meant to be a gimmick players can use to communicate to each other through the game rather than an actual tool in the player's arsenal.

To push the graph more from 4 to 3, we have the special enemy types in the levels now. This should also fix the problem of a lot of the rooms in levels feeling the same, since the only challenge was beating up the same normal enemy. The fast enemy is capable of dashing after players who try to run by without fighting. The heavy enemy is capable of taking many hits, and the offensive enemy is capable of dealing much more damage than the normal enemy we had previously. Special enemies have been in the design documentation from the start of development. I regret not prioritizing them sooner to give the level designers more time to iterate on their placement. Each level designer was put in charge of introducing one of the three special enemies, but with them only just being implemented in their levels, they only have 2 weeks to playtest and iterate on enemy placement.

Playtesters tended to defeat weak enemies accidentally while trying to make them grabbable. Part of the reason is there's currently no way to see how much health enemies have. I've stayed away from the idea of putting a health bar on every single enemy, since the visual clutter would be immense, but the result has meant players don't get a good idea of how much damage their attacks are dealing. I'd like to implement a health bar for each enemy that only appears once the enemy is damaged. That should keep the visual clutter to a minimum while letting players keep track of how close they are to defeating an enemy. Especially with the bulkier special enemies in the game now, it's more important than ever that players understand their damage relative to the health of the enemies. The floating damage numbers alone don't mean much.

Everyone tries to grab furniture. Everyone. Two playtesters even noted it as a bug in their feedback that you can't grab furniture. This is good thing, since furniture was made to be grabbed, and a bad thing, since if we aren't able to implement this feature before the end of production, we'd be forced to remove most furniture items from the levels to prevent literally every playtester from trying to grab them and wondering why they cannot. 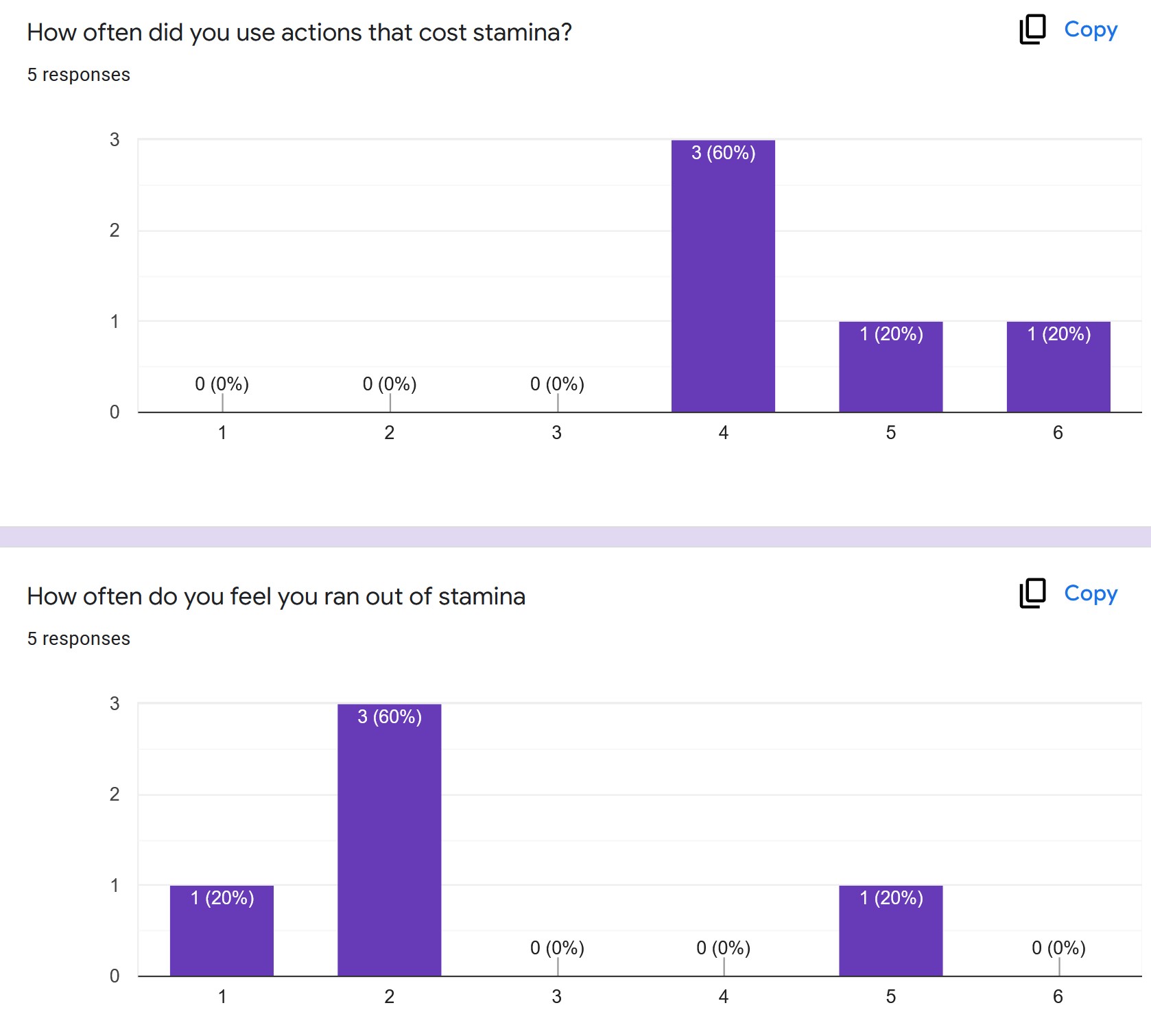 From looking at the playtest data, playtesters use stamina often, but barely ever run out. 3/8 of the playtesters didn't even notice they have a stamina bar, and only 1 person who did ran out of stamina a significant number of times. There's no point in having a resource that no one runs out of. More throws made it into the game immediately after this playtest, so seeing as players have more stamina than they know what to do with, we should be clear to have throws use up substantially more stamina than I planned.

I would like to make the heavy attacks cost no stamina. That would leave players free to exhaust their entire stamina bar on throws and dashing while encouraging a more active use of heavy attacks as the new throws make grabs way more appealing. I would also like to keep the number of ways players exhaust their stamina to a minimum. Using stamina should feel like a tool players actively employ rather than a tax on the player's basic movement. Currently, when players are out of stamina, the only thing they can do is spam light attacks. I'd rather have players alternate between using their basic attack combos and using crazy, over-the-top throws in tune with their stamina regenerating back to full. Seeing the stamina bar at full should tell the player "it's time to cut loose." It should be empowering and exciting in a way it currently isn't.

Players visibly (and audibly) have more fun playing in multiplayer than in singleplayer to the point where it may actually be worth it to restrict the game to multiplayer only. I would like to see how the singleplayer experience is impacted by players being able to grab and throw furniture before deciding. If it doesn't improve enough, even though I'd hate to make the game less accessible to players without a controller to use for multiplayer, I'd rather have a higher percentage of the players that are able to play our game have a lot of fun doing so than have a higher percentage of the population be able to play our game. From the start, the target audience has always been groups of friends playing local co-op.