Hello and welcome back for the 6th and final dev blog post before the final build of this game project! Shapeshift Dungeon has been an incredible journey so far and it's hard to believe the end is so near. During the last sprint we made some new and important changes that help with the systems that weren't working as well as we'd like in the past. For instance, the player can now use the speed upgrade from the stat upgrade potion to increase their attack speed as well as their movement speed, giving more purpose to it as the player can hit faster and therefore deal more damage in a shorter period of time. Where we had previously had players taking the speed upgrade only ~5% of the time, we now have that number above 25% (according to our Unity Analytics)! 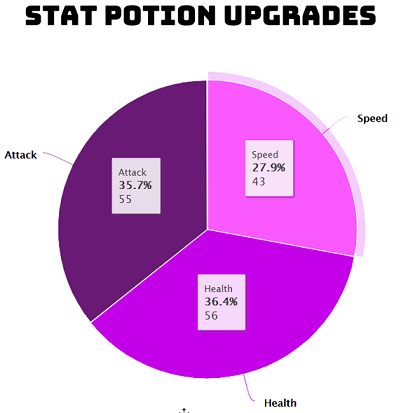 The Attack and Health upgrades were also taken in nearly the same quantity, which is absolutely fantastic. Having these stat potion upgrades be equally viable for the player is important to provide a meaningful dilemma. Otherwise, the player would just pick the same upgrades every time with no hesitation and the game would become predictable and dull.

Another data chart swaying in the right direction is our health potions. Last sprint, about 60% of players were saying that they got enough potions to get by. This sprint, we have that number above 75%, which is a pretty decent increase!

A contributing factor to this is likely the new Kapala Special item, which charges up when killing monsters and heals 5HP when used. Players have been asking for healing other than potions, and the Kapala is a nice optional item for the players who want it. I decided not to add health drops from monsters or from crates/barrels in the game because I believe that would make the game too easy, and would add a luck factor in your survival that detracts from the skill-based gameplay the game currently has.

With the new goblin enemies and monster variants that can set the player on fire, I expected players to rate the difficulty of the game higher. Instead, it is even more consistently at a 4/6 difficulty than before.  The engagement of players continues to go up over time though, which is the absolute best thing to hear as a designer! I'm glad to know that my player-centric approach to design is paying off and players are thoroughly enjoying the game :) 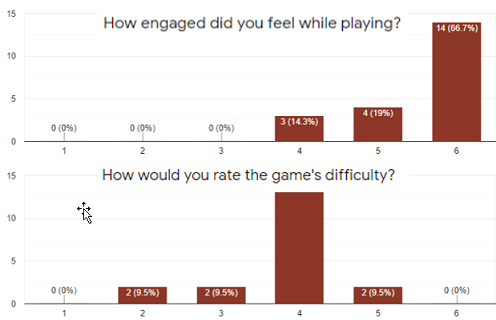 Players are also enjoying our levels more than they used to. Using our in-game level review system, players have been giving ratings or 4 or 5 stars most of the time, with only a handful of ratings lower than that. 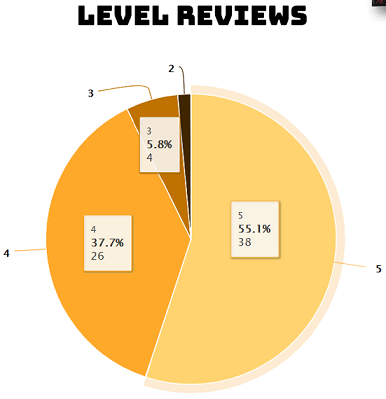 In fact, a large majority of the reviews are 5/5, so that's awesome to hear! Our level designers are evidently doing something right, haha. It's kind of shocking to me how consistent all of our data is, where we have more than 50% of the playtesters selecting the same option out of 6 possible. It just goes to show that we've really honed in on something awesome here and created something that people really enjoy, and have consistent experiences with rather than having some playtesters who find the game way too hard and other who find it way too easy.

So you might ask, if engagement is already so high, what's left for us to improve on? LOTS, is my response. Following the 0.5.1 build we still only have 3 unique enemy types, the Skull, the Crystal, and now the Goblins. However, we've been working on a myriad of other enemies to add more variety to the game. These includes a skeleton which has a shield and can block your attacks, a slime that moves a bit weird and splits into smaller slimes when it dies, and a worm enemy that can burry underground and move between dirt/sand tiles before popping up and lunging at the player. Not to mention, a robed mage boss at the end of the game. That is... frankly too much new content to be adding during the final sprint of the project. And yet, I want to see these implemented anyways! We already have the models and most of the animations for these enemies, they just need programming implementation into the game. In order to achieve this, I will personally be working extra hard to get these in as fast as possible, and will be creating a version 0.6.0 build of the game before the final build so that we can get a final playtest of the new content and fix up and problems that arise.

One more sprint, LETS DO THIS!