Hello and welcome to Development Blog #5, Sky here for another quick deep dive into the inner workings of Shapeshift Dungeon! During the last sprint we made some important new developments, such as finally getting our custom modeled and animated player character into the game, adding grass tiles and some decorations to the early dungeon maps, and adding some music tracks to help players feel more engaged with the game, just to name a few. We also made some important adjustments to the health potion and gem systems in the game, both the address production bottlenecks and to improve the player experience. This included raising the healing value of a potion from +15HP (50% of base health) to 100%. This change makes potions much more valuable, which should help players who felt as though there weren't enough potions previously. It also increases the value of increasing your max health via stat potion upgrades, as each max health increase means that potions will heal you for more. Here's how the playtest data turned out given these changes: 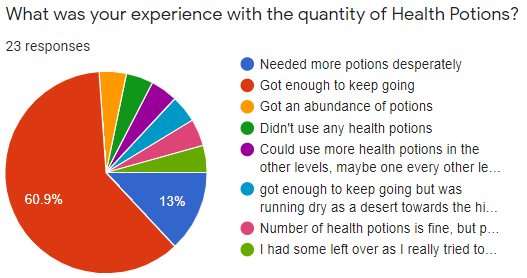 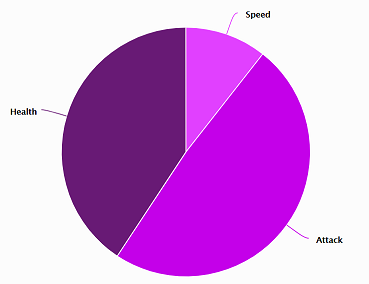 We've been asking this same question about the health potions for awhile now, and it's really nice to see play-testers start to converge on the idea that they got enough potions. Not too many or too few, which is great. There's still a few who said that they needed more desperately, and I'm hoping that the Assist mode we'll be adding in the next sprint will be helpful for those players. We can also see that the ratio of health upgrades has increased a bit from before. Attack upgrades still make up half of all upgrades that players take, but improving the health value of potions has clearly made it the more appealing option that I was hoping for. The speed upgrade is still by far the worst upgrade in the mind of players, I'm hoping to link the speed with attack speed (therefore increasing the Damage Per Second of the player), which should make it a much more appealing option for players.

The gem system adjustments have also been highly successful imo, here is the data on how people felt about spending their gems: 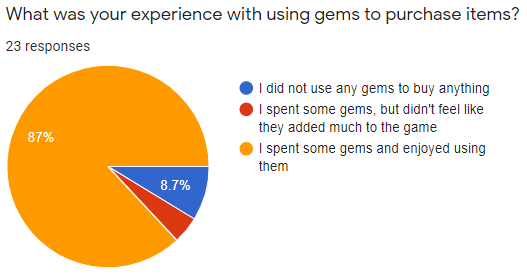 Almost 90% of players said that they both spent some gems, and enjoyed using them, which is incredible. Last sprint it was less than half of that value, as ~40% of players had said that they neve spent any gems. The main addition to the game that fixed this issue was the ability to purchase the second pedestal item. So each time you clear a floor of monsters, you can actually take BOTH items, IF you can afford it. The prices of the second item start cheap, at a measly 2 gems, but steadily increase over time by 2 more gems with each purchase (2, 4, 6, 8, etc...). This means that players are given more options, but still need to think carefully about which items they choose to spend their hard-earned money on.

In order to balance being able to buy pedestal items with  also having the shops on every 5th floor, I decided to add a second source of gems other than monsters - crates & barrels. While these were originally going to just be static decorations within levels, I realized that it was more fun to be able to destroy the crates with your attacks, and we can assign a small probability of a gem appearing from each crate. Players who found these gems seemed to really enjoy finding them, so that's definitely a good feature to keep. Right now though, a smart/thorough player would need to go and destroy EVERY crate they come across to get the most gems. This is pretty annoying and tedious, so for the next sprint I'll instead tint the material of crates and barrels that contain gems to make them visually identifiable instead of totally random.

I'm kind of shocked at how consistently players rated this, and that we have a nice bell curve around the 'slightly too expensive' mark. I think by making some slight adjustments to the shop prices and having more gem containing crates/barrels, this will be just about perfect!

We also have some awesome new bell curves showing both game difficulty and engagement:

Overall, the game is difficult, but maybe not *quite* as difficult as I would like. Some new enemy types and variants (coming soon!) should definitely help with that. Engagement with the game is really high which is awesome to see. It makes me incredibly happy that there are no 1 or 2 ratings, and only a single 3 rating. Everyone else seems to really like the game which is definitely motivating and encouraging to see :)

We're not done yet though! Still 3 more weeks of work to go as of now, I look forward to seeing all of this hard work across the team really come together into something even more incredible than we already have. Go Team!