Hello hello! Welcome back again for Dev Blog #4, your host and game designer Sky here as always. During the last sprint we were able to add a bunch of new levels, gems & shops to allow players more variety of gameplay, a new crystal enemy to change up combat, and an improved stat scaling system, just to name a few. Getting gems and shops into the game was a big milestone, as there is more intrigue to both fighting monsters and the resting rooms on every 5th floor. Players now can encounter 'gem monsters' which are tougher monsters that are visually indicated with an icon of a gem over their heads. These monsters have more health and will drop a gem when they die, which the player can pick up and spend once they get to a shop. Let's take a look at how players responded to this gem system and the game as whole for the latest build: 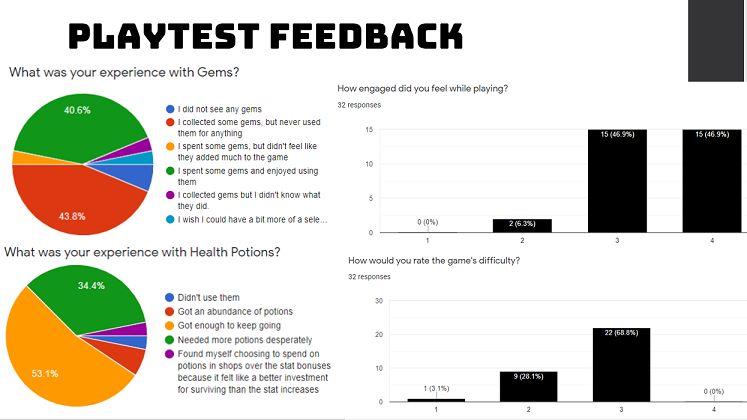 Players are still very engaged with the game, which is incredible to see! But, the majority of players never spent the gems they collected. Based on other data I was able to collect from this form and the level feedback emails, I know that many players are dropping from the game before reaching the 5th floor. So while players are having fun, the game is either too difficult (despite what players say), or it has little to no replay value, and a lot of players never reached the first shop. Thankfully, the vast majority players who did play past floor 5 and spent gems said that they enjoyed using them, which is good. So it seems like moving forward we'll need to focus our attention on making the game just a bit easier for new players, and more repayable after dying for the first time.

We were also given the feedback that the game is too repetitive, and doesn't do enough to teach the player some of the core mechanics of the game. Fortunately, I may have accidentally run into the perfect solution to this problem. One of our 3D modelers, Devin, created a grass cluster asset that we could use to decorate our levels. Only, this asset ended up covering an entire tile rather than just a small portion of one, which gave me the idea to keep it as is and introduce grass tiles into the game. These grass tiles would populate the early levels of the game and the lighting of the game would be brightened to match. Then, as you progress further and further into the game, the grass tiles recede in place of stone, dirt, and lava, and the lighting will darken to show your decent into the dungeon. Here's a sample of what that would look like: 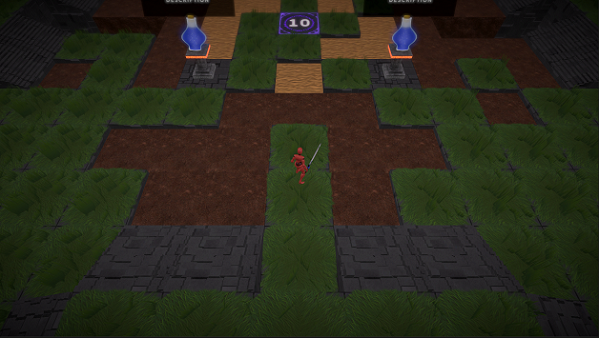 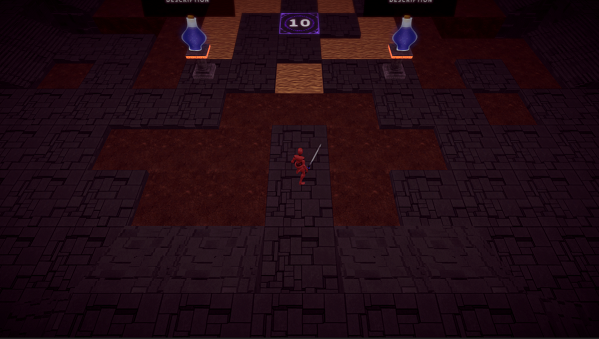 This level darkening system provides more variance between the levels in the game, and the level difficulty would also be scaled along with this. So early grassy levels will have fewer hazards and will focus on teaching the player certain game mechanics, while later levels will have much more hazards and will focus more on challenging the skillset the player has grown over the course of the early levels, allowing them to achieve a flow state of play. This also reflects how the character will be weak and have no items or upgrades early on, and then will have stat upgrades and equipment items by the time they reach the darker, more difficult levels. In essence, the dungeon's theme and tone will match the player's progress.

Another design change I'll be looking to adjust is the healing potions and stat potion upgrades.  Thanks to implementing (at least partially) the Unity analytics system, I know that players are overwhelmingly choosing to take attack upgrades over anything else. Whenever a stat upgrade option is chosen, an event is sent to Unity's analytics tool, which can generate graphs based on the data. This pie chart clearly shows the problem we are facing here: 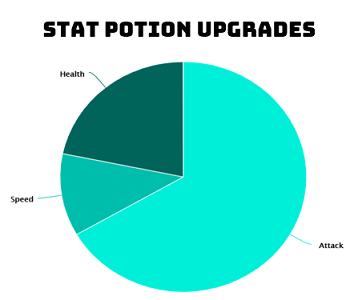 So, in order to fix this I've been looking into ways to improve the Health and Speed upgrade options so that they are more viable for players to take. For health potions, I will be attempting to make health potions a full heal (or at least % based) rather than a flat 15HP. This will in turn increase the value of health upgrades, as each health upgrade will in turn make potions heal the player more and be more valuable. For speed, I want to link an attack speed variable to the animation speed of the player's attacks, so that speed can affect how fast the player can attack as well as movement options. Faster attacks means higher damage per second, which is what most players are trying to optimize for atm, so hopefully including this in the speed upgrade will make it more palatable for players without breaking the game.

Another cool thing about the stats system in the game, is the math we are using to make the upgrades decrease in value over time. It's a bit complicated, but in essence each time you take an upgrade then the value that it increases by, will be decreased based on the number of times you've taken the upgrade.  This is what this system currently looks like for the attack stat:

As you can see, by the 10th increase of the attack stat it is only increasing the player's attack by about 8% rather than the starting value of 15%. It is also easy for us to adjust the calculations a bit and either buff or nerf this system according to playtest results, which is really cool.

For the next sprint, I'll be looking to (finally) get the modeled and animated player character in the game and improve the player attacking controls a bit, as well as implement new items, enemies, and some of the stuff I've mentioned in this blog. Really looking forward to it!