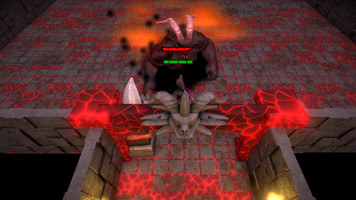 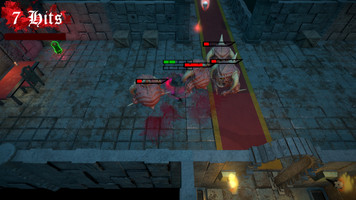 The Hand That Feeds is now out!

The hand that feeds has reached its 1.0 build and is now officially out! We put a lot of blood sweat and tears to make the game what it currently is and we hope that you guys enjoy it!

So here are the major final updates that went into the game!

First off we added a camera zoom as your combo increases. To make the attack feel a little more impactful as your reaching those high combos. This activates at 15 hits.

This may have been spoiled for you a bit in the previous gif but we now have a animations in for the character and his attack! This was much needed and adds a much better feel to the combat in the game.

You will also now receive a little bit of healing for each hit after a 10 hit combo. This is to encourage a more in your face playstyle rather than a hit and run technique. This should know reward players for managing their combo well.

The levels also went through their final pass. The dungeon was in a pretty good place asset wise so we only added a few things for it’s final rendition.

We changed the end level to fit the theme and made stairs that way it looked like you were entering into the boss room. We added puzzle runes to the walls to help with the walking puzzles. Lastly we added carpet throughout the dungeon to help guide the player a bit more.

Here is a look at the puzzle runes in game

We also added a little flare to the mini boss room to make it feel a little bit more epic by adding these obelisks to the level. These also provide a good way to pin enemies and gain some of your health back.

The courtyard got a large amount of assets in its final pass. Some of the assets that the level got were larger set pieces, statues, gates to replace the temp doors within the game, sword racks, and rocks that are spread throughout the level. Similar to the dungeon level we also put the puzzle runes throughout the map to help with the walking puzzles.

Here is a look at the statues in the level

Then here is a look at the sword racks and rocks spread throughout the map to liven it up a bit more.

Along with these additions we also added all of the murals to the level and their associated background text to the story. So try and find all the hidden murals if you can!

The boss level also got a bit of redesign because we felt it was a bit jarring and too red, which was kind of hard on the eyes. So here is a look at that redesign

Last but not least we added level end indicator rather than our placeholder art, so here is what the VFX for that looks like!

We also went ahead and added a death screen and a victory screen to polish the game a bit more. We felt just respawning wasn’t quite enough and we wanted a way of showing that you died and that you won.

And here is a look at the victory screen when you defeat the final boss!

Animations for the enemies also were able to make it in! Which now allows you to see when enemies are attacking you. So don’t get chomped!

Thanks for the Support!

The Hand That Feeds development team is still considering whether it will get more time to create an even more polished game and experience. But until that is decided this is the final version of The Hand That Feeds.

We appreciate the support and hope to see everyone enjoy the game!

The Hand That Feeds Development Team