Howdy everyone! Welcome back for another production blog update on the team's progress with our game! In Sprint 4, I had assigned 196 total points to the team, 135 of which were completed, with only 29 left In-Progress to be completed in Sprint 5. We still have more things to add to the backlog, which I will touch on later in this post, but you can take a look at what our burndown chart looked like at the end of Sprint 4 below. 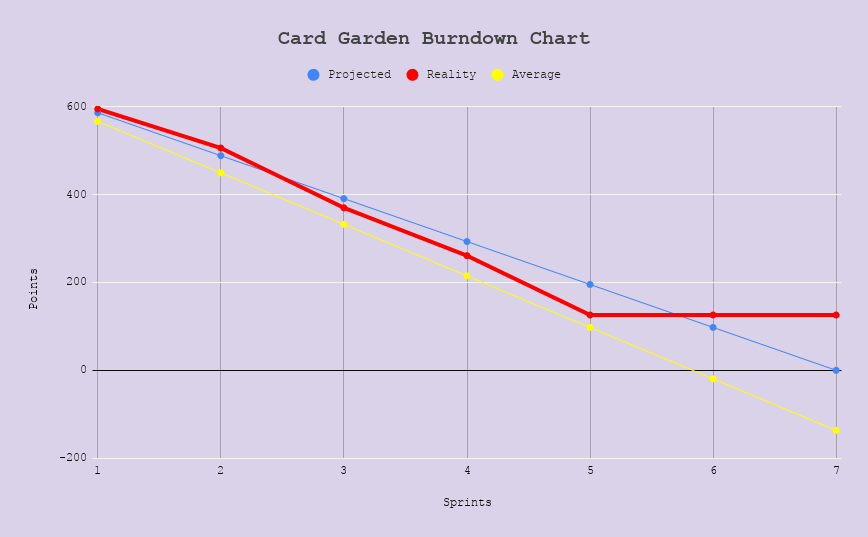 Still got that wiggle room, but since we're at the half-point of the semester of development, we've had to sit down and outline our goals for the next 3 sprints so that we have a plan for what is still to come. Sprint 5 is going to focus on getting any remaining "new" things/systems in the game, and Sprint 6 and 7 will focus on audio and visual feedback implementation, as well as bug fixing, beautification, and overall polish on everything to make sure the game is fun and funky fresh!

With that said, let's jump into it!

The work that our Curly Bracket Crew did this Sprint is a little hard to tangibly see, but rest assured, it's there! They did quite the overhaul on our damage calculations so that they are now auto-scaling using a seasonal/elemental typing system that they also created in this Sprint, courtesy of Sky and Alex respectively. These are things that aren't immediately visible to the player yet, but we are going to be pushing for more visual feedback so that the player is not left in the dark about these things. Speaking of visual feedback, we have quite a few visual things implemented now, adding to the more "complete" look of the game. We have: placeholder health and EXP bars over all relevant player units in the game (thanks to Jacob), Level Selection page implementation (thanks to Arjun), and implementation of enemy models (thanks to Alex). We also have some new functions for future buildings, some of which have already been modeled! This mostly pertains to our Bee Apiary Building, which will attack enemies with swarms of bees.  Lastly, we also have some new playable cards added to the deck, including our Blacksmith card, which strengthens the offensive of all Towers.

Below are pictures of some of the visible changes that can be seen: 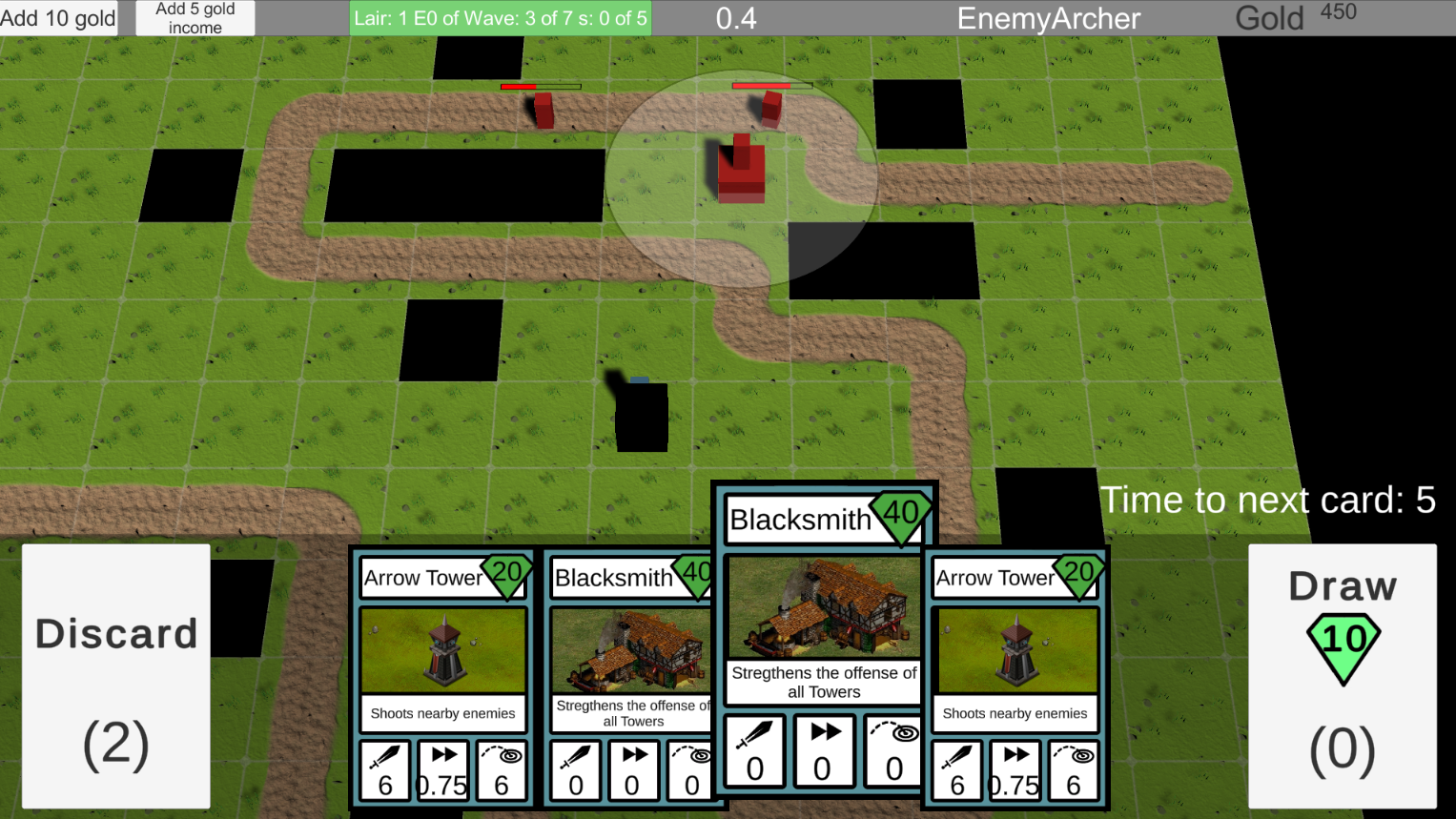 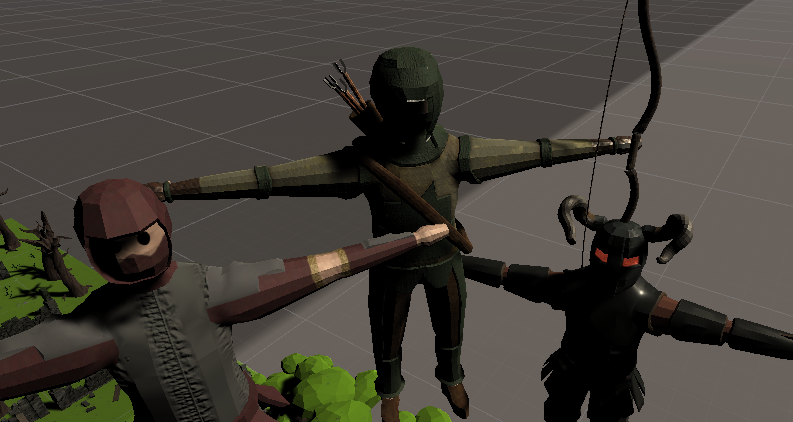 Production for these changes got a little slow in the middle of the Sprint, but we were still able to make meaningful changes that were included in the build by Build Day. We're happy with the changes that were made and implemented, and are excited for them to continue making progress in the next Sprint! Like I said above, we're hoping to get everything system-wise completed/mostly completed in this Sprint so that we can have polish in full swing by Sprint 6.

This Sprint, our modelers were focused more on quality than quantity, and we're quite happy with the models that resulted! Cameron has continued production on Level 2 assets, which are coming our way with textures very soon! Justin, one of our level designers, will be using these as soon as they are textured to beautify his Magical Swamp level, which we are very excited to see. Jeremy has continued modeling and texturing our buildings this sprint, finishing the Blacksmith Building and going on to model our Bee Apiary, which we were absolutely enamored with. Joseph finished texturing the Archer Enemy model, and been working hard on our Gardener Minion model. This is the only model of the ones he's made that we wished we could have let him deviate from the base model with, but in the interest of future rigging and animations, we stuck with it for consistency. He did the best with what he had and we are pleased nonetheless with the result. Below are some examples of the models they've made: 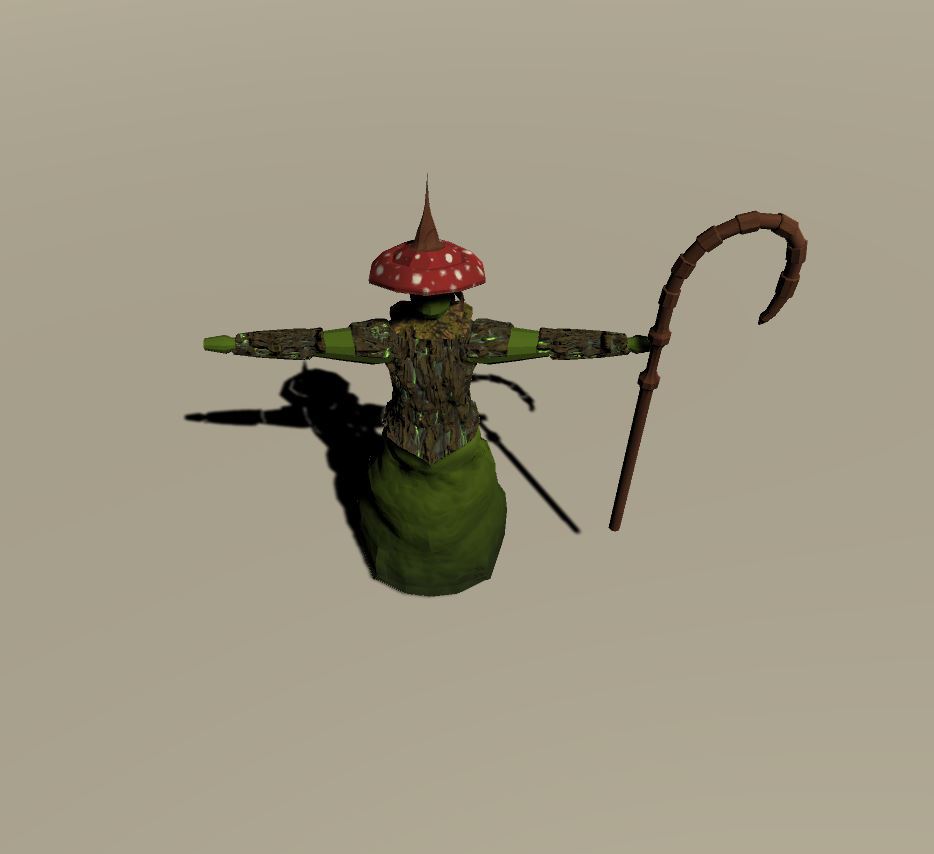 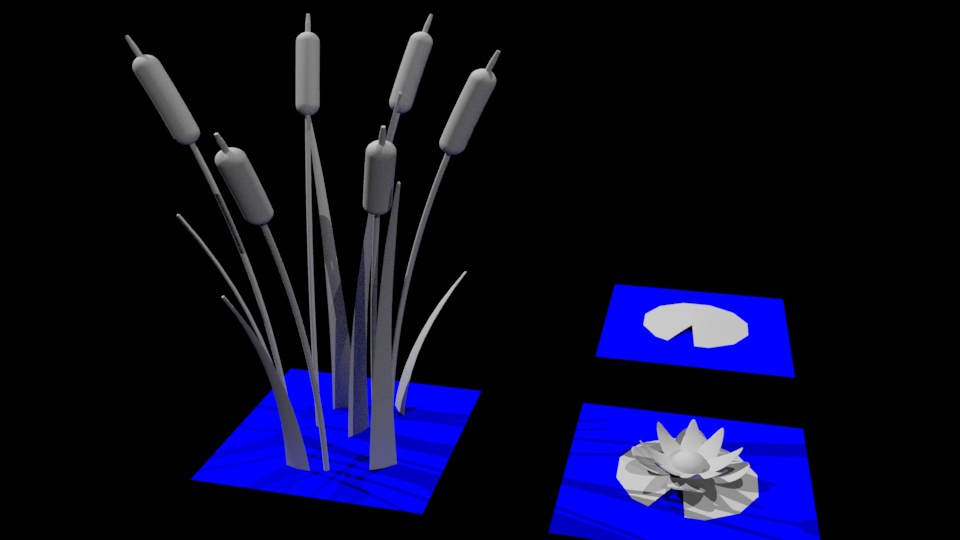 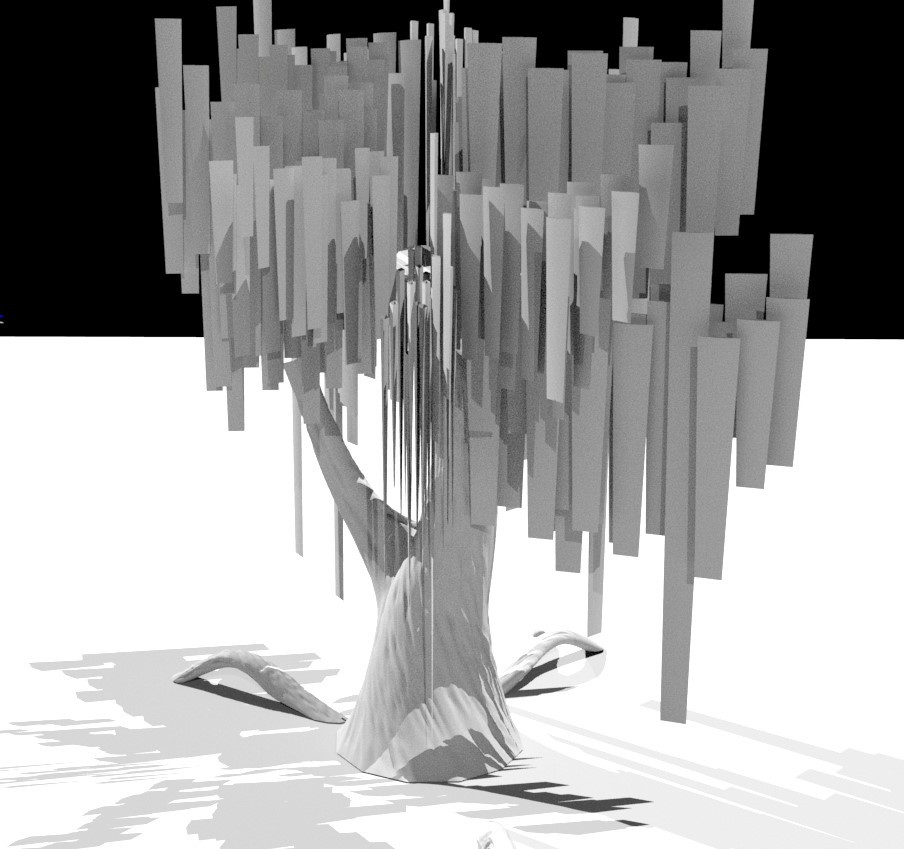 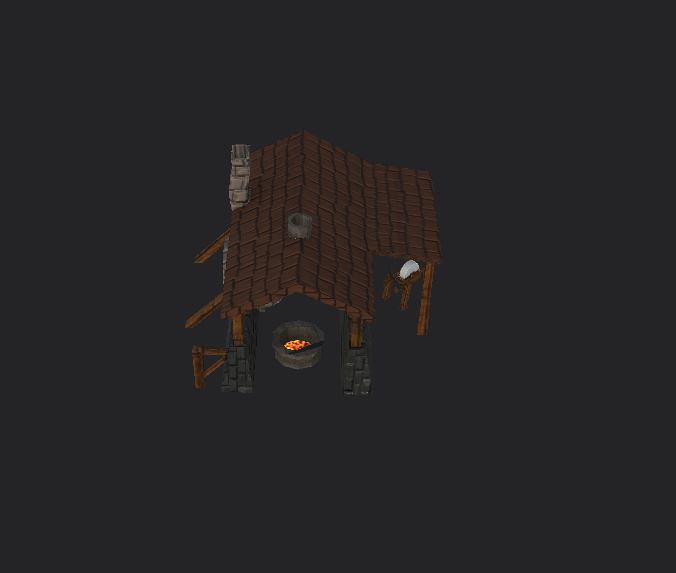 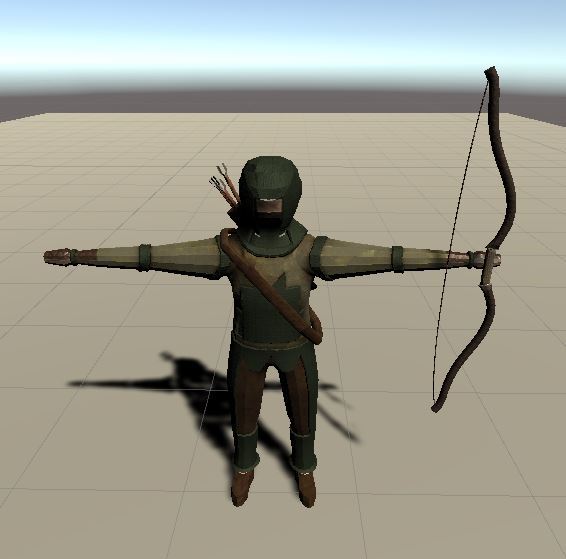 This Sprint, all of our level designers were busy bees hard at work on making their levels truly shine. In Ryan's case, he was doing a lot of polish and balancing for his level, making it look and feel like a Forest Adventure tutorial level. He actually made it more of a challenge, compensating and taking last playtest's feedback to iterate. This is something that will need to be iterated on again in the coming sprint. Justin was working hard on setting up the Encounters of his level, in order to prepare for making his level playable and ready to be playtested in the coming Sprint. In addition to this, Marc did a lot of work on VFX that we are super excited to see implemented in the game soon when we get kickin' with polish. They look amazing and will really add to the feel of the magic in the game. Below are examples:

We got some lovely pieces from the art team this Sprint that we are looking forward to implementing within the game soon! This Sprint, we got some more card portraits from the artists, as well as some UI elements that we'll be using for that UI overhaul I mentioned earlier in this post. We also got a logo that will go on the .exe file for our game builds. Receiving was slow at first, but really picked up towards the end of the Sprint thanks to Atley, who was very quick to get us those UI components and the logo when we asked for them. In the coming Sprints, we're expecting more card portraits and marketing/official art that will decorate both the game and the itch.io page. Below are examples of the art received in this sprint: 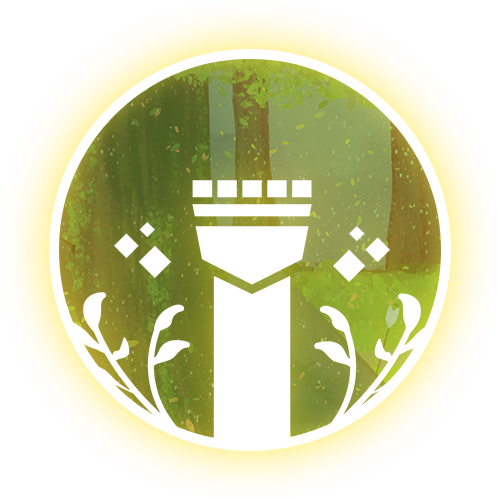 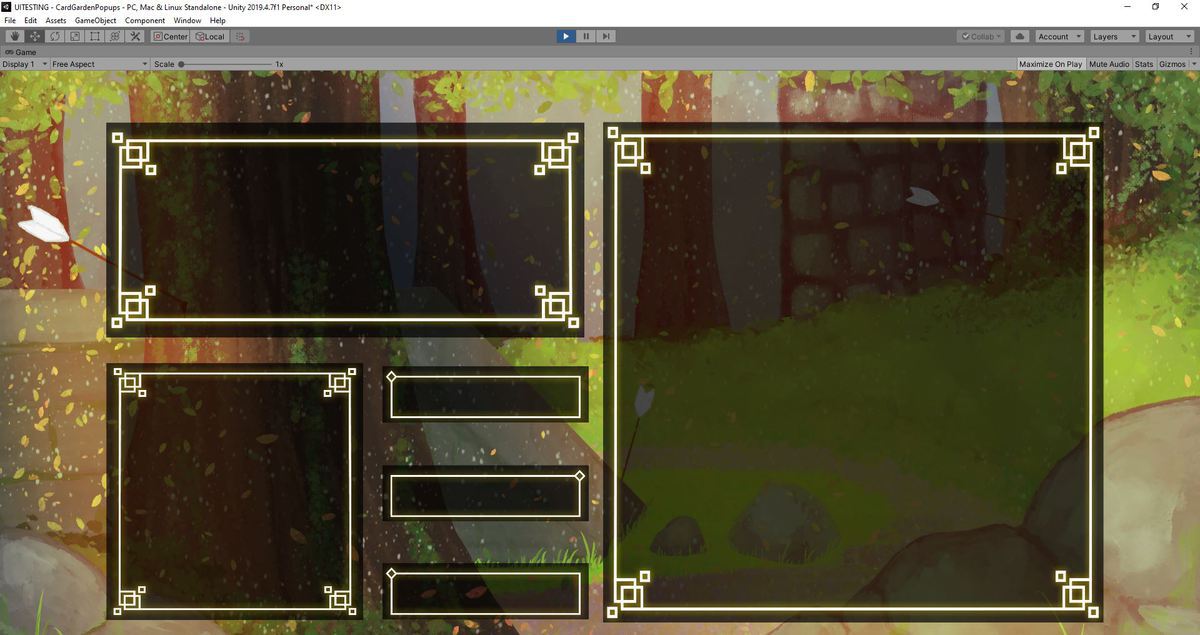 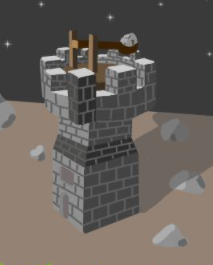 Sprint 4 has passed, and we are now over the half-way point of the semester for production. Quite a daunting fact to think about!  I have every confidence in my team that we will be able to overcome any obstacles that may come our way and make the best of the remaining time we have to make this the best game that we can. After sitting with our professors and hearing the feedback that they had to give us on our game so far, we were relieved to hear that it was in-line with the goals and fixes we already had in the plans for production. Taking their feedback into account and keeping our own plans in mind,  our goals for the next Sprint are to have playable levels 2 and 3 in our next build for playtesting, have an aesthetic and organization overhaul of our current UI, iterate on the difficulty of our first level, and start production on making that first level more of the tutorial it's meant to be. Big goals to meet, but I'm confident in the abilities of my team to do their best. A huge thanks to you for reading this far from the Card Garden team! I am excited to share our progress with you in the next production blog!