Hello everyone and welcome back to another production blog for Castle On Wheels! Despite a valiant effort to get our assigned tasks done, new challenges stemming from working from home as well as bugs and user story blocks, we had a significant setback in our production. As the producer I assigned 62 user stories and 43 of those cards were moved into verify and completed, leaving 19 cards in progress. A majority of our leftover cards were a result of a shift in focus for sprint 5. We prioritized getting level 1 feature complete to better exemplify what we're going for with our game play. For sprint 6, we plan on getting our animations in, setting up levels 2-4 and focus on player feedback with both audio and visual effects.

The first chart here shows what our burndown looks like with all of the features we originally wanted in the game: 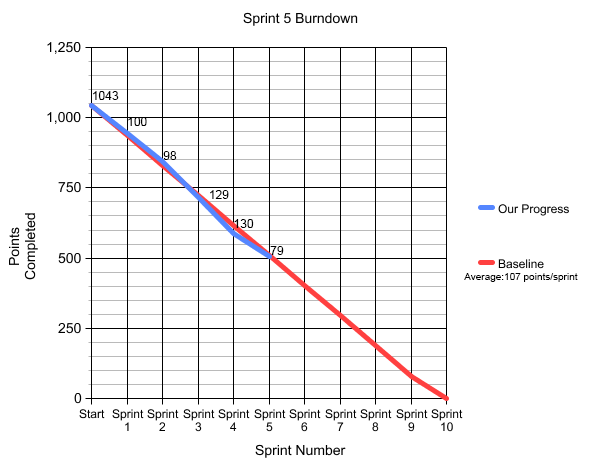 This second chart shows our team progress after cutting several features from the game that we know we will not get to in this semester: 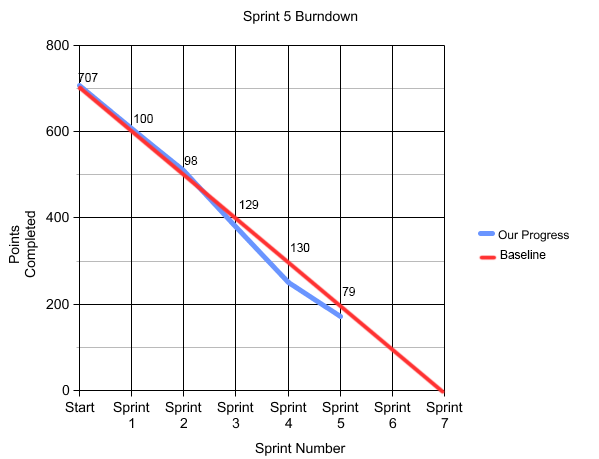 The chart above shows a lot more promising finish, even if we still have to cut a couple of minor features.

I expect our velocity to go back up these last two sprint considering the team has now adjusted to working from home and I have a better idea of the amount of work we can complete. Enough with the logistics though, let's get on to seeing what we got done!

In sprint 5 we turned our concept into a challenging and dare I say, fun game. We introduced some new features that really started to make the game feel like an RTS along with various fixes that improved the game significantly since our previous build. Here's a break down of the features we were able to implement this sprint:

-Added multiple spawners, 1 for each type of enemy

-Added proximity spawners that turn on when the castle is within range. This feature helps with enemy management.

-Enemy behaviors are in! Slinger enemies now throw pebbles from far away and Brute enemies do an AoE attack to surrounding allies.

-Enemy AI can now do damage to the castle

-Added a multitude of variables such as health and damage done to our enemies for the level designers to play with.

-Added a waypoint so that the player can see where their units are heading to.

The orange capsules represent our slingers. These enemies have a ranged attack.

Brutes have an AoE attack that does damage to any allies that are in its radius.

Previously we've been able to show you the Siege Tower and how it behaves when docking to the castle. We are excited to announce that we have this tower fully implemented in the game now with a working model! In addition to our first siege engine being complete, we have not one but 2 more siege engine behaviors completed. These two new siege engines are the Canon Cart and the Ballista. Here's some gifs of all three siege engines in action:

TnT Falls out of the gate directly into the castle, causing large amounts of damage.

Canon cart with multiple canons on it.

Ballista that launches a large, powerful arrow at the castle.

Some of the main changes to the player castle come from "Siege Mode." This forces the player's castle to stop and set-up the canon tower. When in siege mode, the castle stops and targets the nearest enemy structure and continues to shoot at it until it dies. The canon no longer targets enemy units because we felt like this took too much power away from the player. Here's a little gif that shows the castle's new siege mode:

As you can see here, our programmers did an incredible job of knocking out tasks and getting a ton of features implemented this sprint. Every task our programmers completed got us that much closer to getting our game completed! For sprint 6 we'll be mainly focusing on getting our animations setup and in the game, getting our 2 new siege engines implemented and having a fully functional gameplay UI. We'll also be hooking up levels 2-4 for our level designers and start getting those to a playable state.

Our Level Design team took a hit this sprint due to the fact that we had to shift our programmers focus to getting level 1 as close to feature complete as we could. That being said, we were not able to get a whole lot of new stuff in level design. We are able to get level 1 to feel more immersive now that almost all of our 3D models are in. We were also able to get level 3 painted and somewhat pretty. I would like to reiterate that our main goal for this sprint was to get level 1 as close to done as we could and make sure that levels 2-4 are ready for programmers to get everything hooked up. Here's a couple images of the changes we were able to make in level 1 and 3. 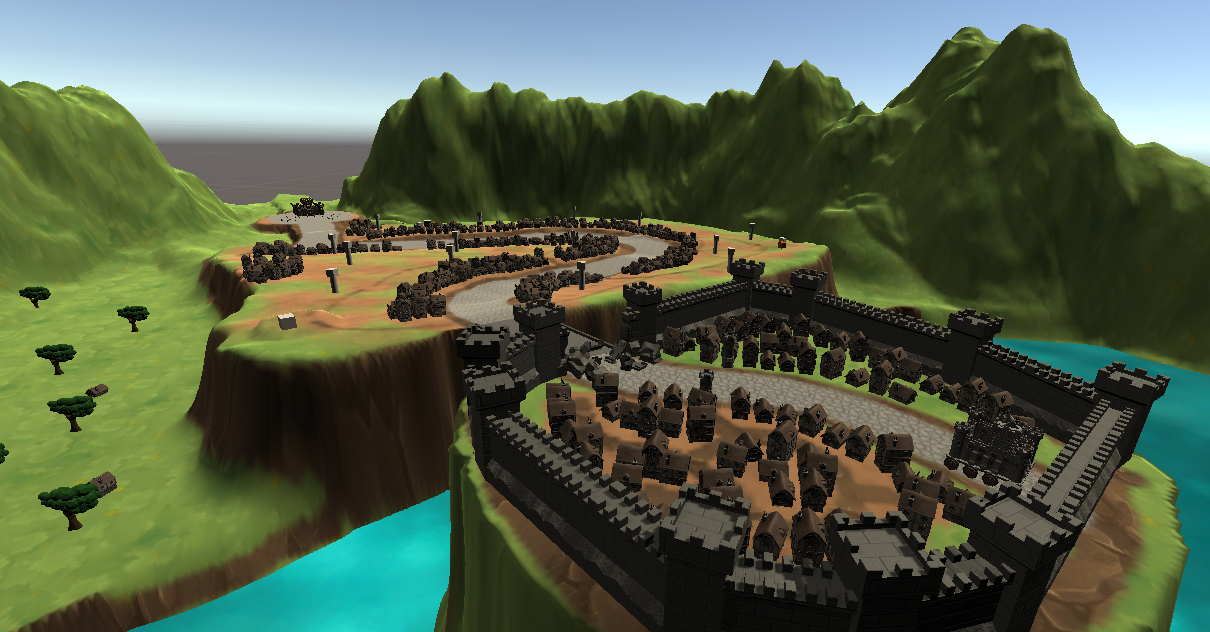 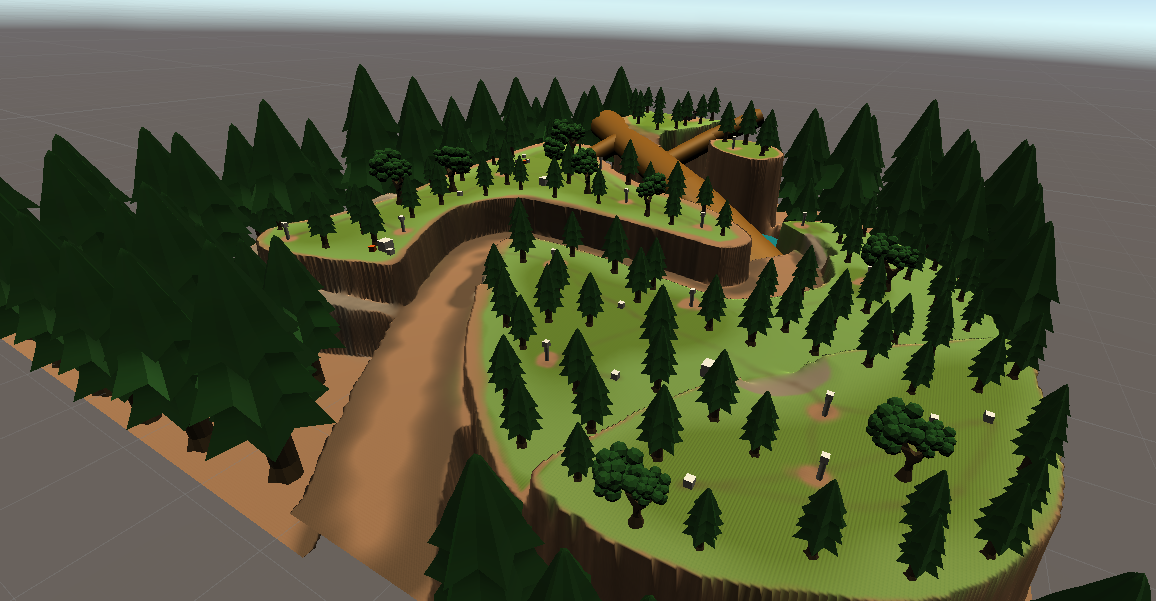 Level 3 ready to be hooked up and be playable

We are looking forward to getting these levels playable in sprint 6 and ready for all of you to enjoy!

Our 2D artist focused on UI art for the majority of this sprint. Our goal was to complete our gameplay UI and get it all implemented in our build. We are happy to say that all but 3 of our buttons are now visible in the game. Although we still have some adjustments to make, here's what our gameplay interface currently looks like: 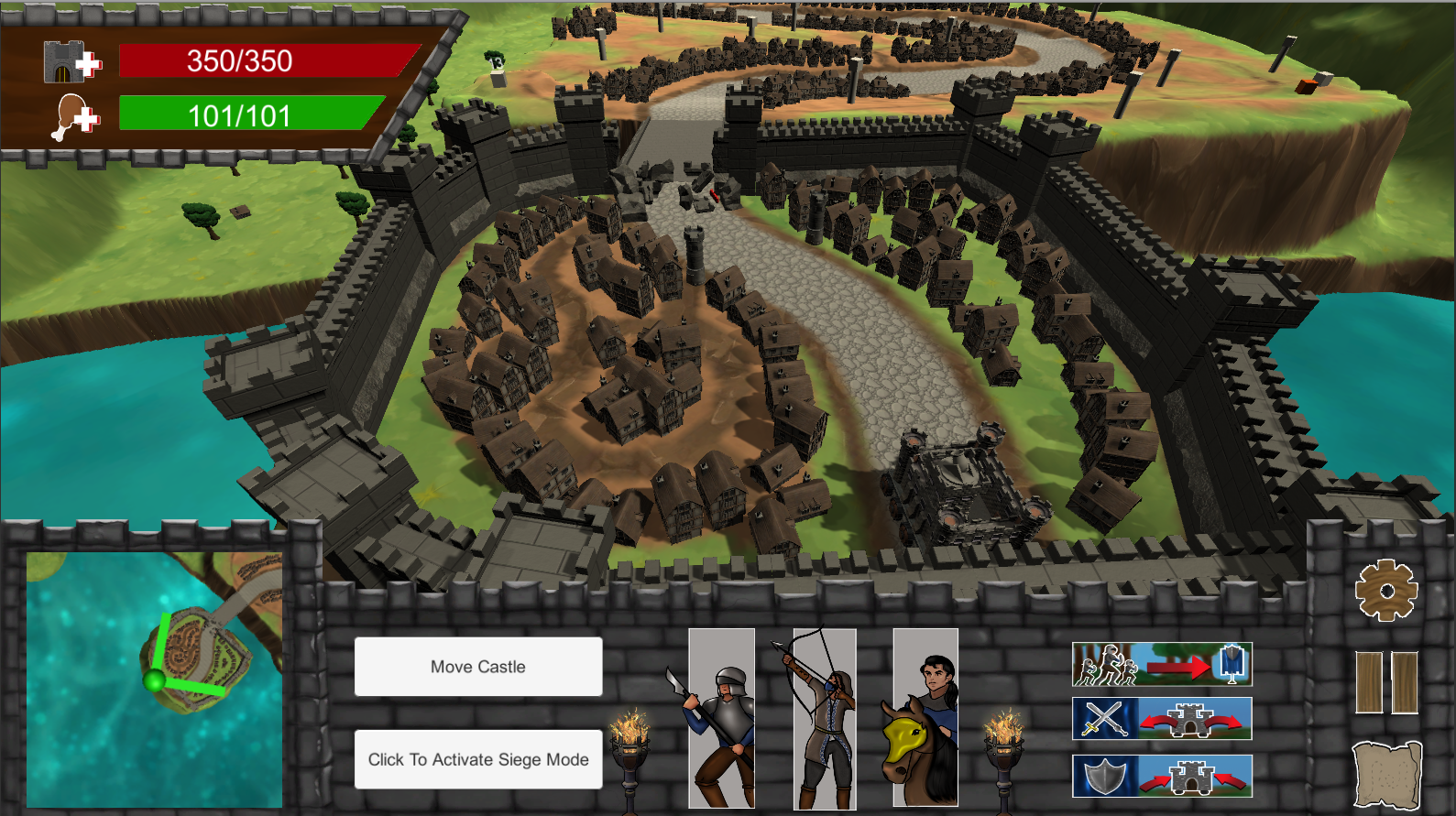 A couple other pieces of UI art we were able to get complete was a torch and 3 buttons that control the castle movement, as well as the ability to activate siege mode. 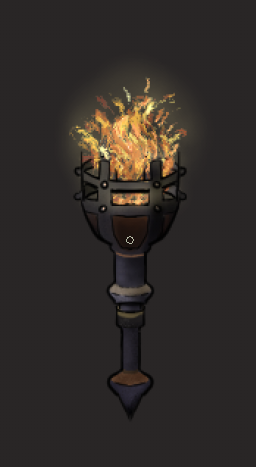 At the top of this post you can see a colored image of our games title screen. Again, we have some minor details to add to it but that will be done at the very beginning on sprint 6. I'll add that image here again for ease of access. We can't wait to get this in the game! 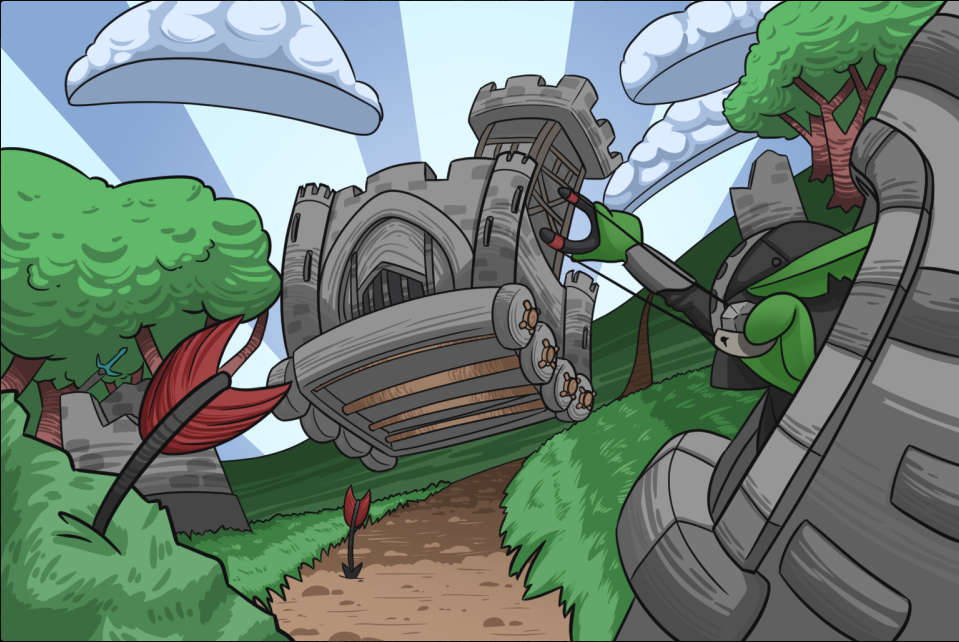 Our modelers really hit it out of the park this sprint and got us back up to where we needed to be on our asset list. Our modeling goal for this sprint was to get all of our character models (enemies and allies) ready for texturing and we were able to achieve this goal plus get a head start on the texturing! We completed weapons for all of the different classes and got 1/3 of our siege engines completed in full. One of our modelers spent the sprint creating tileable textures to paint our levels with. Lastly, we were able to get some of the last props done for level 1 and will moving onto to level 2-4's props. I'll attach images of all the models we completed down below: 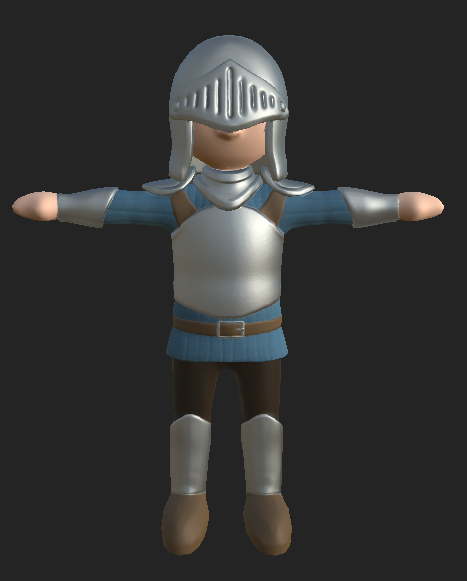 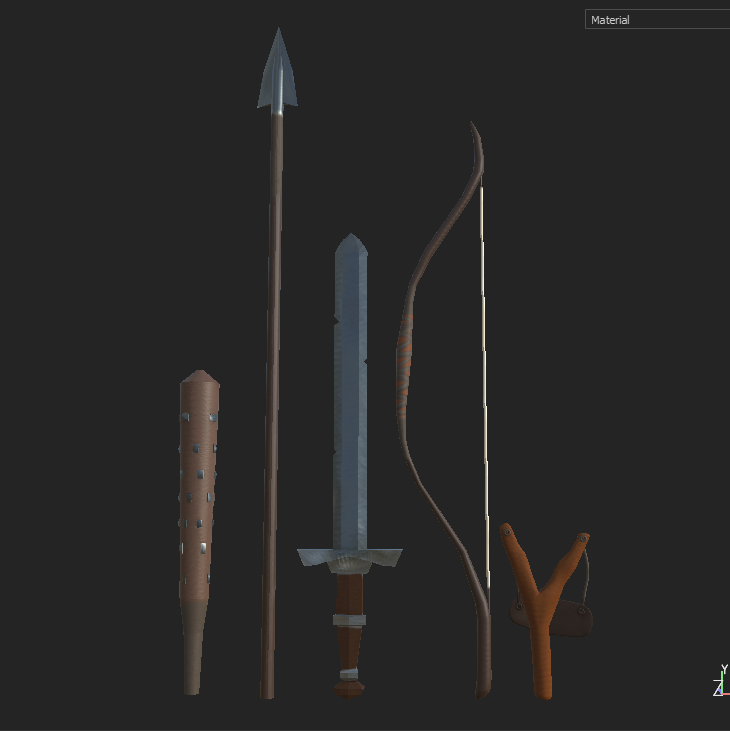 For sprint 6 we'll be focusing on getting completing all of our enemy structures, this includes: enemy spawners, enemy slinger towers, the Cannon Siege Engine and the Ballista Siege Engine. We will also fix up some of the lighting to help our game feel more immersive and fantasy like. We plan on getting the majority, if not all, of our character units textured. Lastly, we'll be trying to knock out as many of our props for each level with a primary focus on the ruins in level 4.

Although sprint 5 started off with a hiccup in our rigs, a.k.a. not using the correct file type, our rigger/animator was able to quickly redo 3 of the rigs that we had completed plus add 2 more rigs to our project. Currently we are only missing 1 more rig, the pony rig for the Heavy Horseman unit and then we can focus on getting all of the animations going for our characters. The amount of work our animator got done this sprint was absolutely amazing and we are super excited to show you the results!

Given that this is our first sprint that we completed being fully remote,  our team is able to create, design and implement features at a steady pace. Our game is now winnable (and lose-able) and we're really starting to see our game take shape. We have so much in store for our last 2 sprints and we will continue to roll this castle to the finish line that's not too far away now. If you made it this far, thank you for joining us in this production update. We hope everyone will stay safe and healthy in these strange times and look forward to updating you again on our team's progress.